An early medieval commoner might chop down a young willow for timber, but that was not the end of the tree’s usefulness. Far from it. A peasant could use the shoots emerging from the stump to build a home or heat it.

Coppicing—cutting down a tree and harvesting the shoots from the stump four to eight years later—goes back to the Neolithic, about 10,000 years. The practice allows people to take advantage of a tree’s established root system to produce timber rather than starting all over from seed. In the forest, coppices coexisted with standard trees and other flora and fauna. Woodlands could be coppiced for hundreds or thousands of years. With the added sunlight, plants and animals that typically lived at the forest’s edge would have a little more space.

Coppicing reminds us of how resourceful our ancestors were. While it’s not too much of a stretch to imagine the discovery of coppices as accidental, the folks’ lack of education as we know it was not a lack of intelligence, skills, or discipline.

Not all trees made good coppices, but ash, oak, hazel, birch, and willow were among the species that were used. Some coppiced trees, like hazel, live much longer if their shoots are collected on a regular basis.

Early medieval Britain especially needed resources close to home, like coppices. With the departure of the Romans around 410, the economy had collapsed. Instead of growing food and making factory goods for export to customers throughout the empire, Britons needed to become self-reliant. The forest had a lot of resources such as food and herbs, acorns for pigs, and lumber.

Coppices provided raw materials for wattle-and-daub houses, barns, and sheds. Wattle-and-daub has been around for 6,000 years, and its materials were free and easily acquired in Britain and on the Continent. Stone, by contrast, was expensive and required workers for a quarry. If stones were scavenged from an abandoned structure, transporting them far from the site would be a challenge.

By Jiel Beaumadier (CC BY-SA 3.0 or GFDL, via Wikimedia Commons)

For a wattle-and-daub shelter, the builder could weave coppice shoots between stakes and create rigid wattle panels for the walls, supported by posts. Timing was essential. The best season to cut coppice shoots was winter, when the wood had less sap and was less susceptible to insects and fungi. But the builder need to use the shoots before they stiffened and would snap when bent. Warming the shoots over a fire would soften them.

Hazel shoots that had grown for six to 10 years were supple and a popular choice. Willow, which can be harvested every one to three years, was another possibility as were slender rods of birch and ash. The woven wooden rods—called withies—would have been one-half to one-inch thick.

Once the panels were in place, a builder could push handfuls of daub—a mix of earth, clay, sand, hay, and dung—into both side of the wattle. People could patch the cracks in the dried daub with more of the mixture (perhaps making the structure less drafty than a stone building) and finish the walls with a limewash (a paint from limestone). Thatch was often used for the roof, and strips of hazel could secure it to the dwelling.

The people living in those homes required fires for cooking and to keep warm in winter. They could use the sticks, twigs, and branches from the forest floor, but charcoal was a better fuel, burning hotter and slower than ordinary wood. Again, the folk looked to coppices, even though the process to convert a freshly cut shoot to charcoal was long and complicated.

The shoots need to be dried for six months, not an easy thing in early medieval Britain, where the climate had turned cooler and wetter. Perhaps oiled, tanned skins protected the shoots.

Kilns often were often built near coppices. Using the same site for repeated firings improved the ground foundation and made the kilns work better. When the shoots were dry enough, they were cut into three- to four-foot lengths and packed tightly around a central timber in a mound or cone, about 10 feet in diameter. The mound was covered with dirt, with a few vents in the bottom. The charcoal-makers removed the central timber and dropped a hot ember into the space, which formed a chimney. 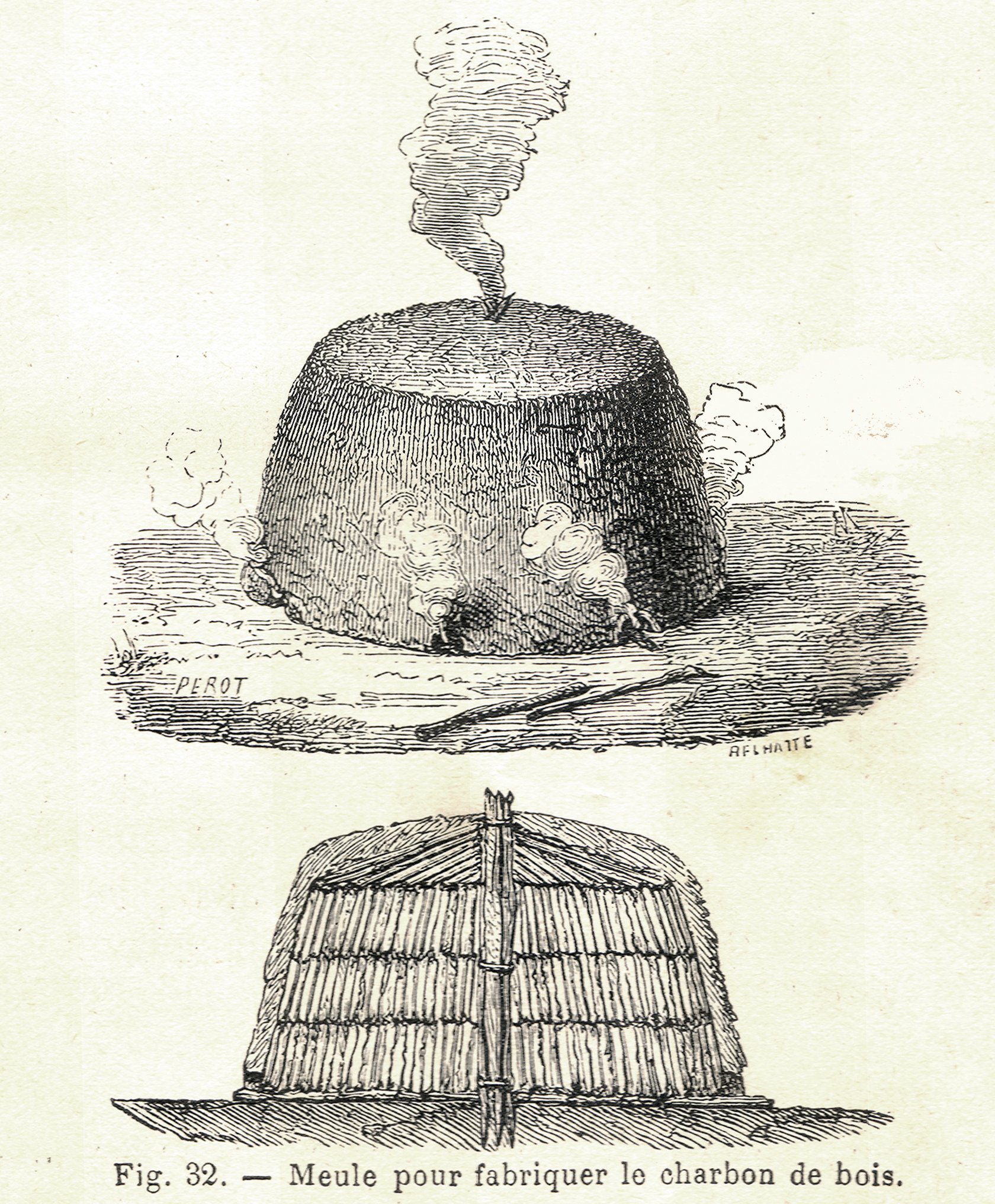 The trick was to keep the fire burning for several weeks, using as little air as possible while it extracted the moisture, saps, and resins (a byproduct was tar). Some kilns were shielded by wind breaks. Still the kiln needed constant tending to ensure it remained intact and the fire was just the right temperature. The wood inside the kiln would be charred but not burned. An experience charcoal burner could gauge the process by the smell. Medieval people often made charcoal for their own homes, but by the early modern period, this craft had become a specialty, and it was easier to buy the product, rather than make it.

Charcoal had more uses than warming homes. Iron smelters relied on the fuel for fires hot enough to extract iron from rock. Smiths need the fuel to create weapons and tools.

With changes in forestry, agriculture, and river management, coppices fell out of favor in the 20th century and have become neglected. In many modern eyes, a stump with emerging shoots doesn’t seem to be good for much. Our ancestors would beg to differ.

This post was originally published at English Historical Fiction Authors.

Ecology and Management of Coppice Woodlands, edited by G.P. Buckley