Eighth-century Franks had their own version age appropriate, educational toys and games, especially for boys born to noble families.

At age 3, they were given wooden swords, with the expectation that they would wield iron ones in a few years. And I do mean a few years, if we are to believe the annals. Childhood did not last long.

Charlemagne was 13 during his first campaign against Aquitaine in 761 with his father, King Pepin. His son Charles (called Karl in my books) was about 11 or 12 in the 784 battles against the Saxony, and as part an effort to intimidate the duke of Bavaria, Charles’s son Pippin of Italy (spelled this way in self-defense) was about 10 when asked to march an army to Trent in 787, although he did not accompany the soldiers all the way to Balzano. The boys probably led the forces in name only, but taking them even near the battlefield isn’t exactly keeping them out of harm’s way.

So I can imagine medieval fathers taking their sons hands and saying, “Hold the hilt like this” and “Move your feet like the way you dance.”

As noble boys got older, their games included archery and simulated combat. To learn to hit a target correctly they aimed a lance at a manikin with a shield. If the blow was not true, they’d been smacked with a bag of flour.

When it came to the pastime of hunting, young boys wanted to be part of the dangerous sport. In 826, 3-year-old Charles (named after grandfather Charlemagne) imitated his father, Louis. When the child spotted the prey, he called for his horse and a quiver of arrows. His mother and tutor had to literally hold him back. Never fear, though. The young animal was caught and brought to the prince, says the poet Ermold, and “he seized weapons of his own size and struck the trembling beast.” 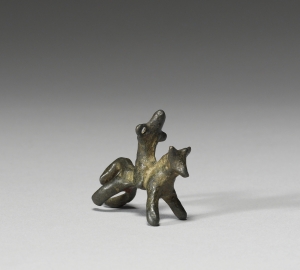 Even indoor forms of play served a purpose. Toy soldiers made of silver, gold, or bronze and board games similar to chess and backgammon were both good at developing strategy. Aristocratic boys were going to grow up to lead common soldiers, conscripts who would get most of their training on the battlefields. The future lords needed to know how to think.

Daily Life in the Age of Charlemagne, John J. Butt

This post was originally published Dec. 23, 2013, on Unusual Historicals.

When we shop for toys for the loved ones on our list, we like to think the kids learning something. Books help children learn to associate those squiggles with objects. Puzzles help them solve problems. Dolls engage the imagination.

In eighth century Francia, the setting for The Cross and the Dragon and The Ashes of Heaven’s Pillar, the nobility had their own idea of educational toys. For boys, it included wooden swords and toy soldiers of bronze, silver, or gold. The purpose of these toys was not just to indulge fantasy. Their parents fully expected their sons to soon be wielding real swords and leading conscripts into battle.

See my post on Unusual Historicals for more about how noble-born boys’ early childhood was part of their preparation to become warriors.