St. Boniface would have never wanted the dispute that followed his martyrdom in 754. Two of his disciples, Sts. Lull and Sturm, wanted his remains.

The stakes were high. Martyr’s relics were attributed with miraculous powers, and churches that housed them attracted pilgrims and their alms.

Lull, the Wessex-born archbishop of Mainz, and Sturm, the Bavarian-born founding abbot of Fulda (who makes a brief appearance in The Ashes of Heaven’s Pillar), had been close to the martyr.

Sturm and Boniface had met in Bavaria when Sturm was a boy. With his parents’ permission, Sturm traveled with Boniface to Fritzlar, where he was left in the care of that abbot and became a priest in the 730s. At Boniface’s urging, Sturm spent nine years in the wilderness, seeking the perfect site for a new monastery. Boniface then persuaded the Frankish mayor of the palace to donate the land and blessed the site for Fulda in 744.

Lull had met Boniface, also a native of Wessex, in the 730s while Lull was on a pilgrimage to Rome. Lull had been a monk at Malmesbury but was persuaded to join the monastery at Fritzlar, which Boniface had founded. Boniface must have been impressed with Lull, who rose through the clerical ranks. He was a deacon in 745, priest in 751, and bishop in 752. Boniface chose Lull as his successor as the archbishop of Mainz. Boniface went out of his way for Lull to be accepted and even wrote to Fulrad, the influential abbot of St. Dennis, to convince Pepin to look favorably on Lull’s new position.

Boniface left the safety of Mainz for the dangerous mission to Frisia, where pagans slaughtered him and his companions. If we are to believe Eigil, Sturm’s hagiographer, Boniface weighed in a couple of times on where his body should rest. As always, I leave to the reader to decide the veracity. 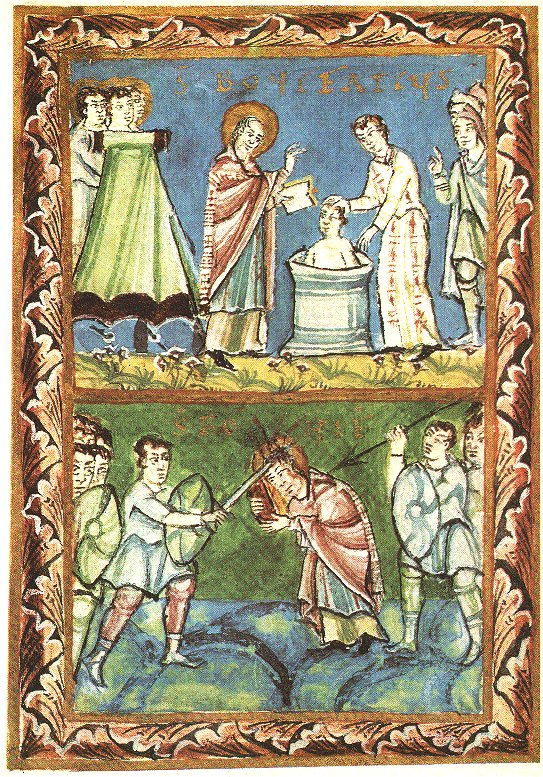 The 11th century Sacramentary of Fulda shows Boniface baptizing converts and being martyred.

When Boniface and his slain followers were taken to Utrecht, the companions’ bodies were buried, but the locals were unable to lift Boniface’s bier. They took that as a sign to send the martyr elsewhere. Once they made that realization, the body was easily moved and loaded onto a boat that went to Mainz.

At Mainz, Lull claimed the relics for his city, but Sturm had rushed there and argued that Boniface had said during his life that he wanted to be entombed at Fulda. The two places were very different. At the time, Mainz was almost 800 years old, dating back to the Romans. Fulda was only 10 years old, founded in the middle of nowhere.

Boniface again stepped in. Appearing in a deacon’s dream, he asked why his journey to Fulda was delayed. Lull refused to believe it until the deacon swore on the altar.

So Boniface was taken to Fulda, and the monastery thrived.

Lull gave up the fight on the relics, but he retaliated. Three of his supporters told Frankish King Pepin that Sturm was disloyal. The abbot of Fulda didn’t defend himself, saying he would put his trust in God.

Sturm and some companions were exiled for two years to the abbey of Jumièges and treated well, but the monks at Fulda were unhappy, especially with their abbey now under Lull’s jurisdiction. When they rejected the abbot he appointed, the archbishop conceded and let them choose one of their own. They did so with the sole purpose of bringing Sturm home. Soon monks, along with nuns at convents and the faithful at other churches, were praying.

The prayers worked. Pepin summoned Sturm and said he had forgotten what they were quarreling over. When Sturm affirmed his loyalty, he returned to Fulda, which was no longer under Lull’s authority, and oversaw construction and decorated Boniface’s tomb. 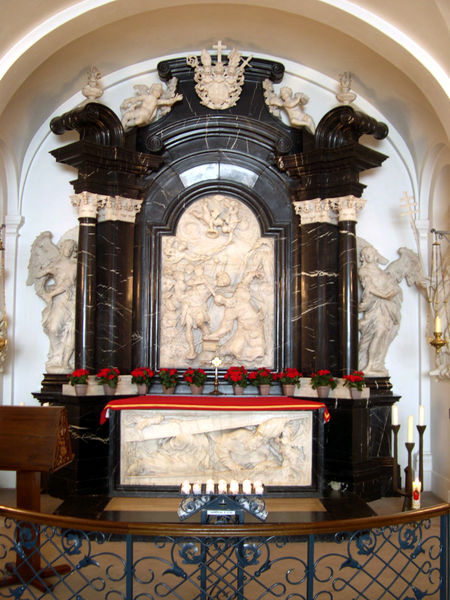 The relics were the monastery’s greatest treasure. They were so valued that when the monks feared an attack from pagan Saxons in 778, they removed the relics and fled to the forest. After three days in tents, they got word that the locals had fended off the attack and it was safe to return.

Perhaps, Boniface would have been heartened by what Sturm said on his deathbed in 779. “Pray to God for me,” he said to his brothers, “and if I have committed any fault among you through human frailty or wronged anyone unjustly, forgive me as I also forgive all those who have offended or wronged me, including Lull, who always took sides against me.”

This post was first published at English Historical Fiction Authors in 2014. Public domain images are via Wikimedia Commons.

Relics of saints and martyrs were attributed with miraculous powers and treasured in early medieval times. Pilgrims seeking a cure for an illness or redemption for sin would endure the bad food, tedium, and dangers of travel to pray in the physical presence of a saint. And in their gratitude, they would give alms to the churches that housed the relics.

Abbots and bishops would go through great expense to obtain a relic, and outright thievery, called pious fraud, was not out of the question.

Still, I must admit some surprise when I learned two churchmen, Sts. Lull and Sturm, quarreled over who got St. Boniface’s relics. Both men had been close to the martyr, which makes the story similar to brothers arguing over an inheritance.

But argue they did, and the fight didn’t end when the relics were housed in Sturm’s abbey in Fulda.

For more about the dispute, read my post at English Historical Fiction Authors.

Daily Life in the World of Charlemagne, by Pierre Riché, translated by Jo Ann McNamara

Saint Boniface, as depicted in an illumination from the 12th century Passionary of Weissenau (public domain image via Wikimedia Commons)