Waldelen and Flavia’s story of seeking divine intervention from Saint Columbanus struck me in many ways, but one could easily escape notice.

Columbanus’s hagiographer, a monk named Jonas, uses the word they as he describes the sixth century childless couple’s predicament: “Both of them begged of him that he would pray to the Lord on their behalf, for they had great wealth, but no son to whom they could leave it after their death.”

That great wealth was a duchy from the Jura to the Alps. Although the couple specifies a son, Jonas’s use of they rather than he implies Waldelen and Flavia were partners. This doesn’t fit the stereotype of medieval women as chattel. Early medieval times were far from ideal, but women often were strong and influential.

According to Jonas, Columbanus agreed to pray for them under the condition they give their first child to the Church. “Joyfully they promised what he wished, asking only that he would not cease to implore God to have mercy upon them.”

It must have been a tough choice, but the couple made the decision together. For more about a duke and duchess who gave up their miracle baby, see my post at English Historical Fiction Authors.

Medieval Sourcebook: The Life of St. Columban by the Monk Jonas

What Christians in the fourth through sixth centuries wore, according to The History of Costume by Braun & Schneider, c.1861-1880 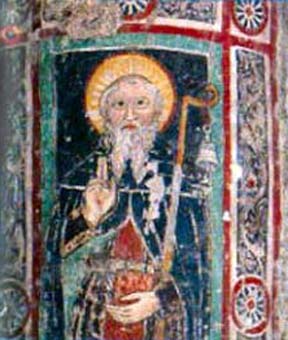