What would be so despicable that the only justice is to tie the offender’s hands and feet to four stallions, have a mare nearby, and let them tear him apart? On top of that, 30 of his kinsmen are hanged—death by slow strangulation—and a buddy is slain in a duel.

Such is the fate of Ganelon, the villain of The Song of Roland, forever branded a traitor.

First a little context. Believed to have been written in the latter part of the 11th century, The Song of Roland is a medieval form of historical fiction, light on the historical and heavy on the fiction. The anonymous Old French epic says a lot about taking a stand against overwhelming odds, but it departs from the actual events that inspired it.

In reality, the retreating Franks were ambushed in 778 by Christian Basques at the Pass of Roncevaux in the Pyrenees, a defeat so traumatic that no one wrote about it while King Charles (Charlemagne) was alive.

Fast forward three centuries near the time of the first Crusades, and suddenly, the Muslim Saracens are the enemy. The war has lasted seven years instead of a few months. And now we have a traitor to blame for the defeat, Ganelon. The author might have been inspired to name his villain after Guenelon (also spelled Vénilon), a ninth-century bishop of Sens who crowned Charlemagne’s grandson Charles and later changed his allegiance.

Of course, a love-to-hate villain is great for storytelling, but I wonder if the author was trying to convey another message. French forces were superior, so good that only a betrayal would defeat them. Perhaps, the author was drawing a parallel to Jesus, who died because of Judas’s betrayal. 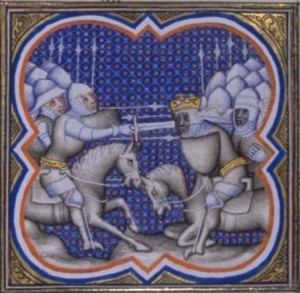 A 14th century depiction of the Battle of Roncevaux Pass, as portrayed in The Song of Roland, which took many creative liberties (public domain image via Wikimedia Commons).

In the poem, our hero, Roland, volunteers his stepfather, Ganelon, to convey the terms of Charlemagne’s treaty with Saracen King Marsil, who has just made an offer for peace. Ganelon is angry—two others guys who tried this were beheaded.

After relaying his emperor’s terms to Marsil, Ganelon reveals how the Saracen can defeat Charlemagne: get rid of Roland. Ganelon instructs Marsil to give Charlemagne gifts and hostages and wait until Charlemagne’s army withdraws, leaving the rearguard behind. Marsil then can attack with overwhelming numbers. Ganelon swears fealty to Marsil and gets treasures.

Roland is appointed to the rear guard at Ganelon’s behest, and sure enough, the Saracens ambush the Frankish rear guard. Roland and his companions fight valiantly, and perhaps the redeeming message of the poem is how the heroes face their certain deaths. After stubbornly refusing to call for help, Roland blows his horn and dies, along with everyone else in the rear guard.

Hearing the call, Ganelon tries to convince Charlemagne that it wasn’t Roland’s horn and that there is no battle. But Charlemagne knows otherwise, and the Franks take revenge. In the meantime, Ganelon is chained and beaten by the kitchen staff and his beard is torn.

And then Ganelon’s story takes an interesting turn. Ganelon doesn’t deny what he did. Instead he shows up in Charlemagne’s presence with 30 of his kinsmen and says that he’s not guilty because he was taking revenge, not committing treason.

Inexplicably, the noblemen at the court are buying this, but not everyone. And so for even more drama, we have a trial by duel between the warrior Thierry and Ganelon’s champion and buddy, Pinabel. Now why would Ganelon, a warrior who has named his sword and rides a charger, need a champion? Was the poet trying to show what a wimp Ganelon was for not fighting his own battles? Given what happened to him after Pinabel is killed in the duel, Ganelon would have been better off taking his chances in a duel.

Ganelon’s reputation as traitor follows him through time, as author Tinney Sue Heath explained in an earlier post. In the 14th century, Dante envisioned Ganelon in the lowest frozen parts of Hell, not that far away from where Satan gnaws on the traitors Brutus, Cassius, and Judas.

Ganelon is the villain of The Cross and the Dragon, but I portray him differently. Hruodland (Roland) and Ganelon come from two feuding families and are rivals for the heroine, Lady Alda. In my version of events, Ganelon is not a traitor, but don’t worry, there is still plenty to hate about him.

A version of this post was originally published at Unusual Historicals on April 22, 2013.

Charlemagne, Ganelon, medieval, Middle Ages, The Cross and the Dragon, The Song of Roland

When Unusual Historicals sought authors to sign up for this month’s “Traitors and Turncoats” theme, Ganelon of The Song of Roland came to mind. His legacy as a traitor is so strong that two centuries after the poem was written, Dante envisioned him in the lowest level of hell, where it’s frozen over. His fate is not as awful as Judas’s but not by much (for more, see Tinney Heath’s guest post about Dante’s vision of Charlemagne and Roland in the afterlife).

Ganelon is perhaps named after a real ninth-century bishop who switched alliances among Charlemagne’s grandsons, but the character in the poem is fictitious. There was no traitor at the 778 ambush at the Pass of Roncevaux, nor were the perpetrators Muslim.

So I don’t feel so bad about making Ganelon a loathsome suitor to my heroine, Alda, but not a traitor. Having him commit treason didn’t serve my purposes.

But it sure served the purposes of the poet who wrote The Song of Roland in the late 11th century. Perhaps the poet was trying to say something about his country’s military superiority around the time of the first Crusade and draw religious parallels. Visit Unusual Historicals for more.