It’s the first Friday of the month, time for another post on the history of atom theory by physics professor (and my dad) Dean Zollman. Today, we’ll explore whether atom theory contributed to Galileo’s problems with the Inquisition. – Kim

Much has been written about Galileo Galilei (1564-1642) – both scholarly work and historical fiction. One of my favorite fictional accounts is the play Life of Galileo by Bertolt Brecht. When I was the head of a physics department I kept the following quote on my web page.

“PROCURATOR (speaking to Galileo): I have come in connection with your application for a rise in salary to 1000 scudi. I regret that I cannot recommend it to the university. As you know, courses in mathematics do not attract new students. Mathematics, so to speak, is an unproductive art. Not that our Republic doesn’t esteem it most highly. It may not be so essential as philosophy or so useful as theology, but it nonetheless offers infinite pleasures to its adepts.” (Translated by John Willett) 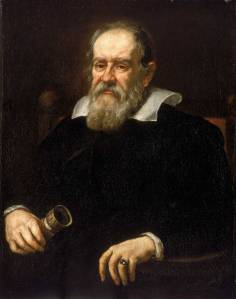 Such a conversation between Galileo and his “boss” probably never occurred, but Brecht, writing in the 20th century, created it to point out how the sciences and philosophy have somewhat changed positions in terms of the priorities of society. And of course, Galileo, who incorporated mathematics into science, was one of the people responsible for science becoming as important as it is.

While Galileo is most known for his contributions to understanding the motion of objects and for his use of the telescope to view the heavens, he did also think seriously about the nature of matter. As early as 1612 in his Discourse of Floating Bodies, Galileo used atomistic ideas to explain his observations. More famously, in his Assayer (1623) he discussed the differences between properties that are inherent in an object such as weight and those that are in our mind like taste. In doing so, he uses terms such as “minimal particles” (“particella minima”) to describe the constituents of matter.

This stance put Galileo at odds with the Catholic Church. As I mentioned in a previous post about early clashes between religion and science over atoms, the Eucharist and atoms were seen as incompatible. So, the Church had difficulties with Galileo making statements about matter being made of something like atoms. Galileo, a strong Christian, had a simple solution. The Eucharist was different; concept of atoms applied to everything but it.

However, this statement did not end Galileo’s conflict with the Church. He was also a strong supporter of a heliocentric model of the solar system. His observations through telescopes convinced him that Copernicus was right – the earth and other planets were in orbit around the Sun. For this statement, Galileo had no simple way out of conflict with the Church. In 1633, Galileo was put on trial and convicted “holding as true the false doctrine taught by some that the Sun is the center of the world.” He was sentenced to prison, but that sentence was quickly commuted to house arrest. He remained under house arrest for the rest of his life.

Redondi started to build his case based on a discovery that he made in 1982. An anonymous letter written to the tribunal of the Holy See in 1633 denounces Galileo as a heretic because of his views on the nature of matter. It states “He [Galileo] begins by explaining the [properties of matter] with the help of the atoms of Anaxagoras or Democritus, which he calls … minimal particles.” Based on this letter, Redondi speculates that the real reason for the trial was Galileo’s statements about atoms.

However, Galileo’s supporters were concerned that because atoms were seen as opposing the Eucharist, he could have been condemned to death if found guilty. To save his life, Redondi claims, the charges were focused on the solar system.

Redondi has written a book, Galileo Heretic, which makes the case much more completely than I have here. However, I have not found any other historian who considers Redondi’s argument a solid one. Stephen Greenblatt, whom I discussed in an earlier post about rediscovering Roman poet Lucretius, states bluntly that the anonymous letter “did not lead to any action against Galileo.” Bernard Pulllman, who wrote extensively on the history of the atoms, says “I am personally inclined to dismiss [Redondi’s hypothesis].” On the other hand, none of us were there, and even if we were, we would not have been party to the secrets of the Inquisition.

(Just for the record, Galileo was eventually exonerated by the Church – in 1992. Sometimes things move slowly.)

Next time, we will move across the English Channel and take a look at how atoms were doing there in the 17th century.

Dean Zollman is university distinguished professor of physics at Kansas State University where he has been a faculty member for more than 40 years. During his career he has received three major awards—the National Science Foundation Director’s Award for Distinguished Teacher Scholars (2004), the Carnegie Foundation for the Advancement of Teaching Doctoral University Professor of the Year (1996), and American Association of Physics Teachers’ Robert A. Millikan Medal (1995). His present research concentrates on the teaching and learning of physics and on science teacher preparation.