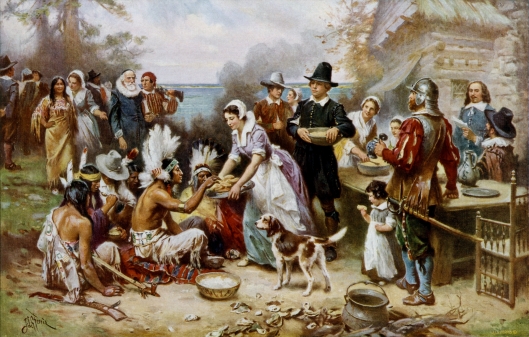 The First Thanksgiving, by Jean Leon Gerome Ferris, circa 1912 to 1915 (public domain image via Wikimedia Commons)

It’s a lovely image, isn’t it? Two disparate peoples coming together to celebrate the harvest. The painting is full of inaccuracies in both the costume and manner of Native Americans and the English settlers. The Pilgrims didn’t wear black, and the Wampanoag did not wear elaborate feather headdresses and would not have been sitting on the ground. Also the Wampanoag should outnumber the settlers almost two to one.

Yet art is not about historical accuracy. In this case, the artist is trying to convey the ideals of peace and fellowship. So, join me at English Historical Fiction Authors for more of what the first Thanksgiving really might have been like.

The image most Americans have of the food at the first Thanksgiving is similar to Jane G. Austin’s 19th century description: a long table laden with stew, clam chowder, turnips, oysters, venison, ale and root beer, hasty pudding, and of course a turkey, only stuffed with beechnuts instead of bread.

Only problem is that Jane G. Austin was writing a novel and took a lot of liberties, says Andrew F Smith in his book Eating History. But Austin’s account was taken for truth and adopted into school curricula.

So what was the first Thanksgiving table in 1621 really like?

The 1922 book History of the Pilgrims and Puritans by Joseph Dillaway Sawyer quotes Edward Winslow, who describes a feast that lasted three days. Four of the 55 settlers killed fowl, and the 90 Native American guests got five deer.

The menu probably had turkey, venison, corn (also called maize), and ale, Smith says. In A Thousand Years over a Hot Stove, Laura Schenone adds cod and perhaps a pudding made from goat’s milk.

And just in case you might be feeling overwhelmed with all the preparations for your feast, the task of feeding 145 people for three days fell to the Mayflower’s four surviving married women and their helpers, five teenage girls and a maidservant. These women were the true heroes of the holiday. Jennie A. Brownscombe’s 1914 The First Thanksgiving at Plymouth portrays an idealized version of the feast. (From Wikimedia Commons, published before 1923 and public domain in the U.S.)