When the Romans abandoned Britain around 410, an economy based on mass production and export collapsed. But international trade did not die. From the 5th through 7th centuries, the inhabitants of Dinas Powys hillfort might have enjoyed olive oil, spices, and other imports.

Southwest of today’s Cardiff, Wales, the hillfort is a treasure trove for anyone interested in post-Roman Celtic life. Anglo-Saxons (a catchall term for Germanic tribes who migrated to England) didn’t conquer Wales. The site probably was abandoned around 700, but a nearby village of the same name exists today.

In 410, Britons might have thought themselves freed from Roman occupation. Still, they needed to rely on resources close to home for survival, and they faced the constant threat of invasion from opportunistic Irish, Picts, and Anglo-Saxons.

When Dinas Powys, the setting for “Betrothed to the Red Dragon,” was thriving, it was home to a petty king and his family, along with household servants, weavers, and metalsmiths. The property is about one-fourth of an acre, about the size of a good-sized lot in the United States.

Two stone buildings apparently sat at right angles to each other. One was a 600-square-foot hall, a place for feasting. The meals often included meat, particularly pork, but the livestock was likely raised elsewhere and bought into the fortress. The second structure, about half the size of the first, might have been used for storage or slave sleeping quarters. I can imagine it as a treasury.

The hillfort was in a forested area about 1.5 miles from the sea, a good location to trade with merchants who sailed from far-away lands.

Whoever chose the hillfort’s site had defense in mind. The fortress was on a ridge, with steep slopes to the north and west. Over ensuing decades, its rulers constructed a series of ramparts and ditches on the southern part of the area, and they employed smiths to smelt and craft iron, essential for armor and weapons.

The defenses served other purposes. Commoners did the actual building, probably as a service to their king. This reinforced the social order—peasants served their lord, and their lord protected them from enemies. Bulwarks and ditches were also a show of wealth—that the family had possessions worth guarding.

The kings were indeed protecting their source of wealth, much of it not from Britain. Archeologists have found North African and Mediterranean amphorae that could have contained olive oil or wine. The family might have also bought spices, dried foods that didn’t grow in their climate, or textiles.

In the kitchen, servants used unglazed, undecorated, and unpainted course ware from western Gaul. Made on a wheel, jugs, jars, and bowls were light brown to grey but could also be red, black, or cream. Hard and gritty, the surface looks like someone had wiped or sponged it while it was still wet.

At the table, visitors would have seen imported pottery, a better quality than vessels made by Britons. Plates, bowls, cups, and mortaria (bowls with flanges and embedded with sand or grit to pound and mix food) from the Bordeaux region would have greyish-black slip, and the bowls featured rouletting and stamp decorations.

Host and guests might have drunk that imported wine from a Kentish blue-glass squat beaker, similar to one in an Anglo-Saxon princely burial, or glass bowls. Apparently, the Celts and Anglo-Saxons weren’t always fighting.

What the kings at Dinas Powys traded for these goods is open to speculation.

They probably didn’t pay with money. The system of exchanging coins for products went away with the Romans.

So the kings needed commodities worth a long and hazardous voyage from the Mediterranean. The fortress could produce cloth, furs, and leather, and it had hearths for melting copper-alloy, silver, gold, and glass, and making the materials into jewelry. Bronze Roman coins might be worth more if they were melted and shaped into a brooch.

The kings might have been something of middlemen, too, trading goods made elsewhere in Britain with merchants from overseas. At their feasts, they would give and receive presents. Perhaps, they exchanged some of those gifts—say an Anglo-Saxon glass claw beaker—a few amphorae of wine.

The finds at Dinas Powys show us Britain was not completely isolated from the rest of the world after the Romans left. Those discoveries also cut into a few stereotypes about the Dark Ages. Although life in early medieval times was far from ideal by 21st century Western standards, it was not all poverty and war.

This post was originally published on English Historical Fiction Authors.

Dinas Powys in Context: Settlement and Society in Post-Roman Wales by Andrew Seaman

The Quest for Arthur’s Britain, by Geoffrey Ashe

A scene in “Betrothed to the Red Dragon” has my heroine getting dolled up for an important visitor. This is not a date. Rather, she is conveying her respect and her status.

In 5th century Britain, Gwenhwyfar has her maid braid her hair and secure the plaits with glass beads. Combs were essential for men and women, and were carried in a special pouch.

Dye from elderberry reddens Gwenhwyfar’s cheeks, lips, and nails. Dye from another berry darkens her eyebrows. Women (and men) could check their looks in mirrors made of polished bronze or silver. 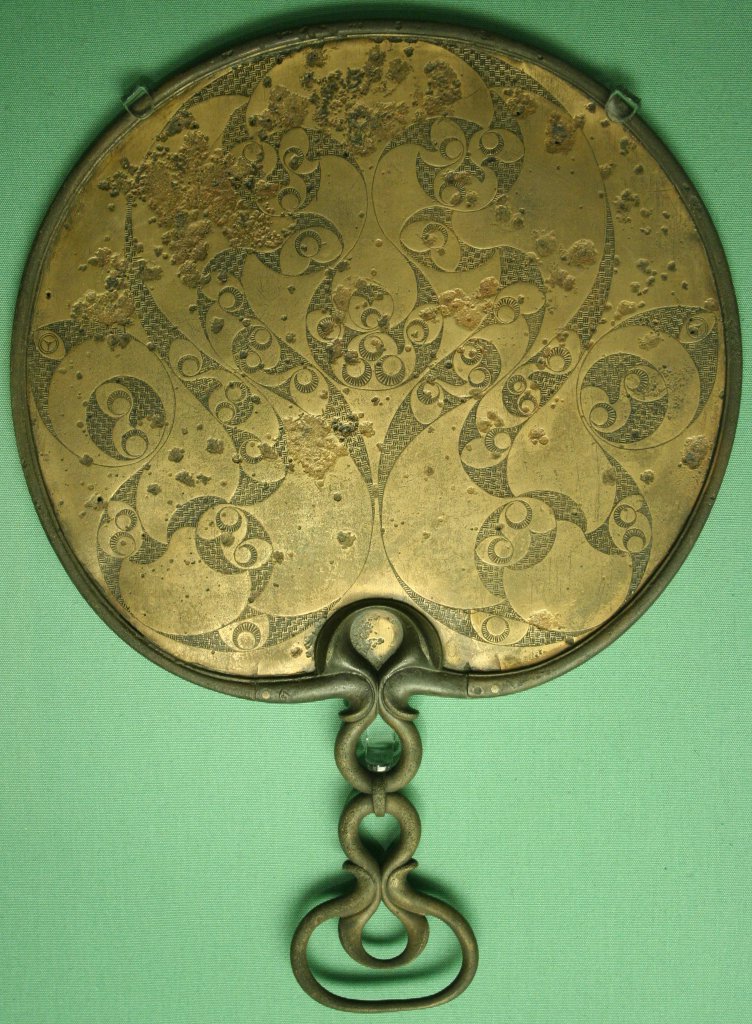 Photographed in the British Museum, public domain, via Wikimedia Commons

Perfume, made from steeping flowers in oils or wine, was applied to skin, combed in hair, and sometimes sprinkled on clothing. Gwenhwyfar opts for lavender, an herb to increase ardor. She doesn’t want to marry, but she will use every weapon she can.

Her male guest, Artorius, is also aware of his appearance and uses it to convey his rank. His cheeks are shaved, and he wears a torc, a silver collar.

Both of them choose clothing with the most expensive dye: red. The color flatters them but not in the way you may think. It is proof they have wealth.

For Gwenhwyfar and Artorius, it’s a bit of both.

Although she is a Christian, Gwenhwyfar, the heroine of “Betrothed to the Red Dragon,” would have observed Samhain, or Calan Gaeaf as it was called in Wales (where my Gwenhwyfar’s fortress is). At this time of year, she would attend sunrise Mass at the church she patronizes, and at dusk, join the revelers dancing around the bonfire.

In the 5th century, long before the Church adopted All Saint’s Day, she is like many Britons. Her beliefs in the supernatural are a mix of Christian theology and Celtic paganism. She will show Christian piety yet respect the pagan rites to celebrate the harvest, help the season of growth and fertility return, and keep the otherworldly beings from wreaking havoc.

Like a lot of things about this time period, the exact nature of those rites remains unclear, and they varied by region.

The ancient Celts divided the year into summer and winter. Samhain (pronounced sow-an or sow-in) means summer’s end, and Calan Gaeaf means first day of winter. Either way, it marked the start of the new year.

Samhain falls on a cross-quarter day, between an equinox and a solstice. Celts would do the practical things to get ready for winter—bring in the harvest and collect the herds and slaughter all but the breeding stock. While there was all this meat, it was a good time for a feast. And find other enjoyment afterward—it was a favorable time for women to get pregnant.

It was also a magical time. The Three Cranes (what we call the Pleiades) would reach the highest point at midnight. Celtic souls came from this group of stars. The holy day was the boundary between light and dark. The line between mortals and otherworldly beings, and the living and the dead, blurred.

Bonfires were started afresh from rubbing wood on wood. Representing the sun, the sacred bonfire was a source for a new fire brought to each house. With the gates between natural and supernatural open, Celts saw this as a time for divination. In Wales, revelers danced around the fire and placed stones with their names into the flames. Before the fire died, they hurried home to escape the short-tailed black sow and lady in white. If any stone with a name was missing the next morning, that person would die within a year.

Gwenhwyfar heard those stories growing up, along Adam’s fall from Grace and Jesus’s Resurrection. In a time when supernatural forces could determine survival through winter and victory on the battlefield, it made sense to please every deity. If lighting a fire brought summer back a few months later, so be it.

“Samhain and the Celtic Origins of Halloween” by Nicholas Rogers, Halloween: From Pagan Ritual to Party Night

A History of Pagan Europe by Prudence Jones and Nigel Pennick

Celtic Astrology from the Druids to the Middle Ages by M.G. Boutet

Myths and Legends of the Celts by James MacKillop