The story of Siegfried is part dragon slayer and part tragic soap opera, and it’s deeply ingrained in the Germanic psyche. You only need drive along the Rhine and encounter Drachenfels, the high hill where he slew the beast, and Worms, the city where he was betrayed and murdered.

The roots in history are tenuous. Part of Siegfried’s story might be based on a fifth century slaughter of rebellious Burgundians by the Romans, and a supporting character has a similar name to the Burgundian Gundahar. But we don’t know if Siegfried or someone like him existed. Nevertheless, he captured the Frankish imagination, and the story spread to the north, where Siegfried is called Sigurd. In the 19th century, Wagner gave the tale new life in his Ring Cycle operas.

Like any legends, there are variations, but here are the basics. Siegfried, the son of a slain warrior, forges a sword from the pieces of his father’s blade, one that can split anvils. At the instigation of the dwarf Regin, he goes after a giant-turned-dragon, guarding a cursed, stolen treasure.

The hero has one chance. He digs a ditch and lies in it. When the dragon goes for a drink, Siegfried stabs it in the soft underbelly. The dying dragon warns him that Regin plans to kill him.

Regin emerges from hiding, cuts out the dragon’s heart, and begs Siegfried to roast it. While it’s on the fire, Siegfried burns his fingers and sticks them in his mouth. He understands the speech of birds, who also tells him of Regin’s treachery. This time Siegfried listens and kills Regin. He bathes in the dragon’s blood, which makes him invulnerable except for where the linden leaf falls between his shoulders.

His next quest: Rescue a maiden in an enchanted sleep. She isn’t the stereotypical Sleeping Beauty. She’s Brunhild, a warrior queen who will marry only a man who must prove he knows no fear by riding though a fire that surrounds her.

Siegfried makes it through the flames and cuts off her too tight armor, which revives her. They fall in love. If only the story ended here, we’d have a happily ever after and could forget about the curse on the treasure. But the story continues, and we come to the part that resembles a soap opera.

When Siegfried leaves to do heroic deeds, Brunhild pledges her troth, and he promises to remain faithful. 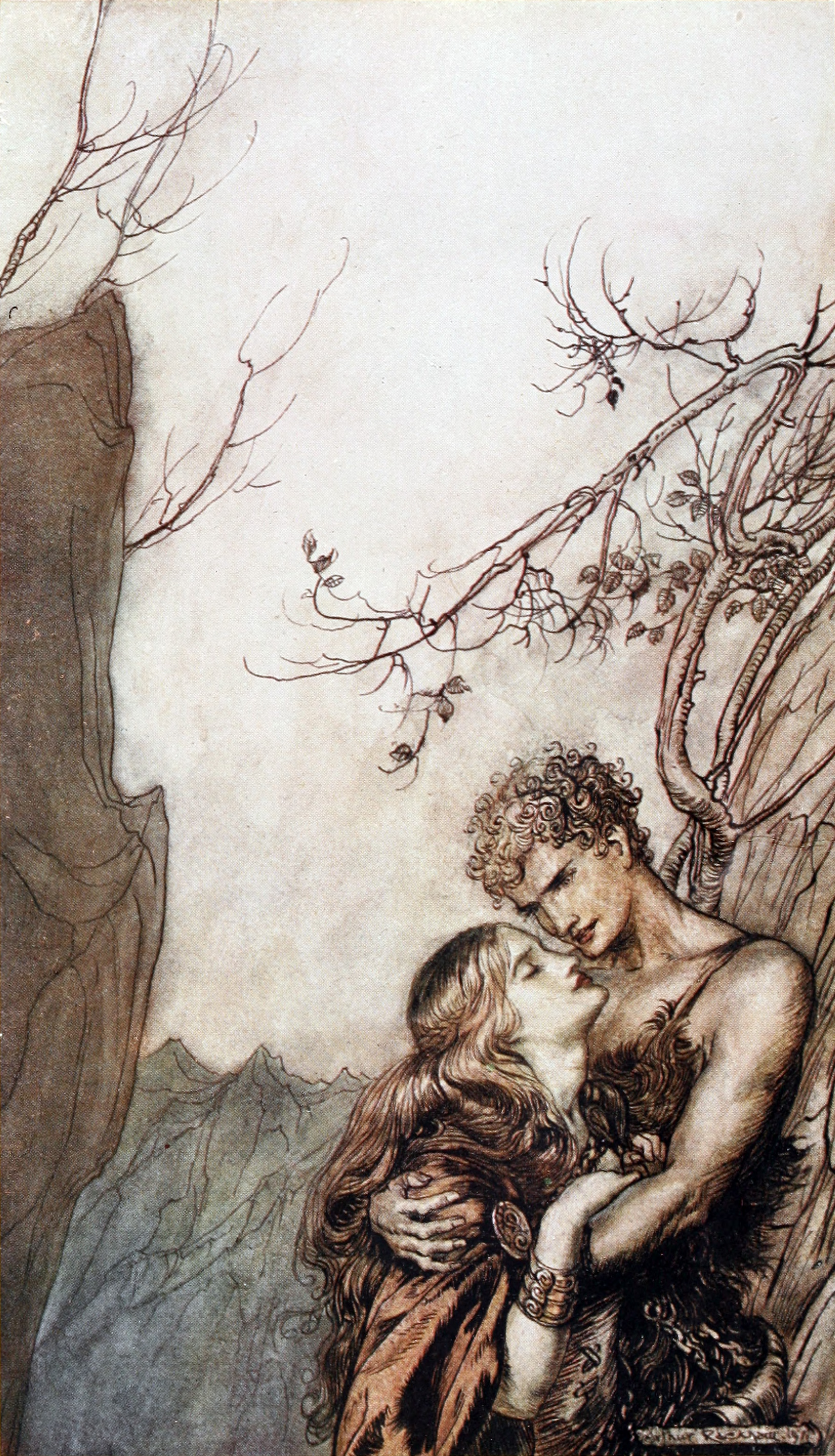 Siegfried arrives at Worms, and that’s when his troubles really begin. There, he meets the lord, Gunnar (one of two or three brothers), and his sister, the beautiful Gundrun (also called Kriemhild). Siegfried drinks a potion that makes him forget Brunhild and then marries Gundrun.

Then it gets more complicated. Gunnar wants to marry Brunhild, but he can’t get through her wall of fire. The solution: he and Siegfried change forms, then Siegfried rides through the flames and claims Brunhild on Gunnar’s behalf. Fooled by the ruse, Brunhild reluctantly agrees to marry Gunnar. Siegfried removes the ring he originally gave to her and replaces it with a ring from the hoard.

And this could have been a happy ending for both couples, sort of, except for one problem. Brunhild learns the truth. When the women were about to bathe in the river, Brunhild refuses to be downstream from Gundrun, claiming a better father and husband. Gundrun can’t stand it and tells her Siegfried was the one who braved the fire. Then, she shows her rival a ring—the original token of Brunhild’s betrothal to Siegfried—as proof.

This becomes a matter of honor of Brunhild. She can’t be married to two men and plots with Gunnar and his brother to kill Siegfried. While they are hunting, the hero is stabbed in his only vulnerable spot, between the shoulders.

Brunhild is overcome with remorse, stabs herself with a sword, and pleads to burn with Siegfried on his funeral pyre. The grieving Gundrun lives only for vengeance, one with betrayal, murder, and cannibalism.