When I decided to write a novel based on one of the Roland legends, I knew very little about the Middle Ages, but I was certain of one thing: medieval people didn’t bathe. I recall being told by teachers that the folk thought it was unhealthy. As an author, all I needed to decide was whether the characters would notice how bad they smelled.

So imagine my surprise to find a section about bathing in Pierre Riche’s Daily Life in the World of Charlemagne. Carolingian princes took baths and changed their clothes once a week. OK, so that’s not as often as Americans who can’t live without their daily showers, but it’s a lot more frequent than what I was led to believe.

So how did the misconception of medieval filthiness come into being? We can blame the plague for that, or rather belief about how the plague was spread in the 15th century—bad air that entered the body through the pores. Medical treatises of the time advised against frequent bathing, among other things, in order to keep the pores closed.

Go back to the Carolingians of the eighth and ninth centuries, and you’ll find a different attitude. Baths were a requirement for palaces, and bathhouses contained hot and cold pools. The bathhouse at the Charlemagne’s palace at Aachen (Aix-la-Chapelle in French) was spring fed and could accommodate up to 100 bathers.

Abbeys also had baths for the residents, guests, and the sick. Yes, you read that last part right, the sick, who were allowed baths on a mostly regular basis. So much for bathing being bad for health. Frequent hair-washing in the winter was to be avoided, but that’s not exactly a surprise when you consider how cold it was indoors.

Some medieval people didn’t bathe, but the reason had nothing to do with health. Abstaining from the bath was a form of penance, just like giving up wine or meat or something else you enjoy.

Between baths, people of all classes would wash using basins of cold water. Just like most of us, medieval people wanted to be clean.

This post was originally published on Jan. 23, 2013, on Unusual Historicals.

When I was researching daily life while writing The Cross and the Dragon, I was most surprised to learn that medieval people bathed.

Before reading a section of Pierre Riche’s Daily Life in the World of Charlemagne, I had thought it common knowledge that medieval folk didn’t bathe because they thought it unhealthy. Heck, even teachers repeated this.

Common knowledge, as it turns out, is wrong on this one. Carolingian palaces were required to have baths, and bath houses had a place at abbeys as well. 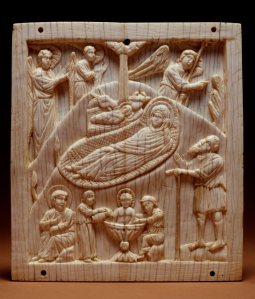 This 10th century Byzantine work of art includes a depiction of baby Jesus getting His first bath (public domain image provided to Wikimedia Commons by the Walters Art Museum).