In Queen of the Darkest Hour, I have a newly baptized Christian swearing an oath on saints’ relics. A lot of saints’ relics. It is possible, if the holy objects are tiny enough for a portable reliquary.

Medieval portable reliquaries were the size and shape of a purse. It is possible a pilgrim could visit multiple sites, collect miniscule, ordinary looking objects, and house them inside the portable reliquary before it was gilded with metal and decorated.

Portable reliquaries allowed pilgrims to be in the presence of a saint even when they had returned home. They were also handy in politics, when someone promised to be a vassal to his lord.

In Queen, this new Christian was an important person—it would be a spoiler for me to identify him—and he was provided with two reliquaries for his vow to King Charles, my heroine’s husband: “By the bone fragments of the holy martyrs Ewald the Fair and Ewald the Black, the hairs of the holy martyr Ursula, the oil of the lamps burning above the tomb of the holy martyr Boniface, the stone chip from the tomb of Saint Lioba, the dust from Saint Willibald’s and Saint Walburga’s graves, and a splinter from the True Cross, I make this oath and will keep it all my days, so help me God, creator of the heavens and earth.”

For more about portable reliquaries, see my post on English Historical Fiction Authors.

Comparing and contrasting the epitaphs for Hildegard and Fastrada, Charlemagne’s third and fourth wives, can lead some misreading between the lines.

When they died—Hildegard in 783 and Fastrada in 794—Charles treated them the same. He had them interred with honors within a church, the most desirable of hallowed ground. He donated land to the Church and paid for Masses on behalf of their souls, and he commissioned epitaphs. Paul the Deacon is loquacious in his praise for Hildegard. What Theodulf wrote for Fastrada is shorter:

“Here lie the glorious remains of Queen Fastrada, whom cold death snatched away in the bloom of life. Noble by birth, she was united in marriage to her mighty husband, and nobler still, she is now united to the King of Heaven. The better part of her soul, King Charles himself, she left behind, to whom a merciful God may grant long life.”

Theodulf was famous for a lengthy poem lauding the royal family, so scholars have speculated on whether the epitaph’s brevity means something.

Was Fastrada so awful that Theodulf had a hard time finding something nice to say about her and was being tactful? If Theodulf had also written Hildegard’s epitaph, I would give credence to that. 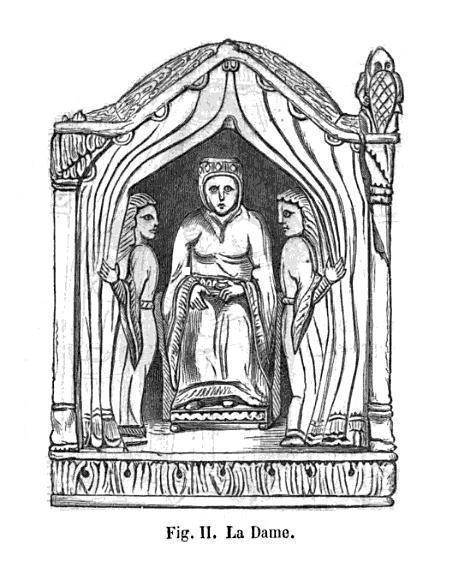 Instead, I’ll provide a little speculation of my own. It is possible Paul’s grief drove him to write verse upon verse while Theodulf’s impaired him. Having supervised an obit desk, I can attest that grief affects everyone differently. Theodulf’s later poem praising Charles’s family was crafted under different circumstances. We don’t know how long it took the poet to compose or how many revisions he made.

Theodulf’s attitude toward women comes into play as well. He did write “A Woman’s Wiles,” urging men not to be manipulated by their wives. But when he refers to the king as “the better part of her soul,” he likely is referring to Fastrada and Charles’s close relationship—the original meaning of “better half.”

Perhaps, we are complicating something simple. Theodulf might have been acknowledging the grief of a bereaved husband while trying to comfort him. He says Fastrada is “united with the King of Heaven” yet left her husband all too soon.

Charlemagne, Fastrada, Pepin the Hunchback, Queen of the Darkest Hour

Was Queen Fastrada, Charlemagne’s fourth wife, truly cruel or was she the victim of a backlash against strong-willed, influential women—a backlash we’ve seen in the 20th and 21st centuries with Nancy Reagan and Hillary Clinton? That question launched me into writing Queen of the Darkest Hour and making Fastrada my heroine.

I first heard of Fastrada while researching my debut novel, The Cross and the Dragon. Charlemagne’s biographer Einhard attributes attempted coups to “the cruelty of Queen Fastrada.” What did this woman do? I thought.

Einhard never elaborates, and since Hildegard was Charles’s queen at the time of my first two books, The Cross and the Dragon and The Ashes of Heaven’s Pillar, I set the question aside, figuring that whatever it was, Fastrada must have been a bad person. That is, until I encountered Fastrada again in the Royal Frankish Annals, when she and Charles were overjoyed to see each other upon his return to Worms from Rome.

Maybe there was more to this story. Like how Thuringians might have resented Charles making peace with a Saxon leader who had wreaked havoc on them. Or an eldest son destined for the Church when he really wanted to be a future king like his brothers.

What’s known about Fastrada: She married King Charles in October 783, a few months after the deaths of Queen Hildegard and Queen Mother Bertrada. She was joining a family with seven children and possibly an eighth on the way. She was from East Francia, an area where Charles needed an alliance during his ongoing wars with the Saxon peoples, but we don’t know where exactly in East Francia. We don’t know when she was born or what she looked like.

Documentary evidence indicates she and Charles loved each other and that she was influential—only people with power or influence attract enemies. Fastrada died in 794, possibly before her 30th birthday. The cause of her death is not disclosed. There is a clue of a chronic illness in a 791 letter, in which Charles asked her to write to him more often, specifically about her health.

She and Charles’s marriage produced two daughters, both of whom became abbesses. Unlike Hildegard, Fastrada was not the mother of future kings, and the lack of sons might have contributed to the posthumous trashing of her reputation.

Allegations of her cruelty come years after the deaths of Fastrada and Charles. In addition to Einhard, the anonymous writer of the Revised Royal Frankish Annals cited her bad behavior as the reason eldest son Pepin conspired to overthrow his father. Like Einhard, the Reviser doesn’t specify the alleged atrocities, and he implies skepticism about the rebels’ motives.

Cruelty, by medieval standards, was persecuting one’s own people—massacring the enemy was something to brag about. In the primary sources, the closest we come is blinding Thuringian rebels. But in the medieval mind, that brutality is justice for people who deserved death. Nor was this punishment unique to the Franks. The Romans and the Byzantines used this technique on political enemies.

A novelist can make any decision in portraying Fastrada, including a harpy. However, I believe she made a scapegoat to explain the plots against her husband. I chose to make her a true medieval woman with the beliefs and biases that come with her time, yet a sympathetic teenager who wants to be a good wife to her much older husband, a good mother to his children, and a good advocate for her people in East Francia.

When I was considering Queen Fastrada’s story for my third book in the days of Charlemagne, I knew it would be different from anything else I had written—and that was a good reason to do it.

My heroine and antagonist, Fastrada and her stepson Pepin, were real people, and I needed to tread carefully. Fortunately for this novelist, not much is known about them, and the history has gaps that an author can fill with whatever best suits the story.

And now after several years, on and off, of research, writing, and revising (and revising again and again), I am proud, excited, and thrilled to announce my third novel is out in ebook and print. In Queen of the Darkest Hour, Fastrada must stop a conspiracy before it destroys everyone and everything she loves.

The story opens in 783, the day before her wedding to Charles, king of the Franks and a widower with seven children and an eighth on the way by a concubine. Fastrada is haunted by the Saxons’ attack on her home fortress, and more wars loom. Yet her greatest peril lurks within the castle walls: Pepin, Charles’s son by his embittered former wife. Blaming his father for the curse that twisted his spine, Pepin rejects a prize archbishopric and plots with his uncle and mother to seize the throne.

Based on historic events during Charlemagne’s reign, Queen of the Darkest Hour is the tale of a family conflict endangering an entire country—and the price to save it.

Queen of the Darkest Hour is available on Amazon, Barnes & Noble, Kobo, iBooks, and Smashwords. If you’d like a preview before you decide, you can read an excerpt and the first chapter at kimrendfeld.com.