Charlemagne, Hildegard, Historical Fiction, medieval, Middle Ages, Queen of the Darkest Hour, The Ashes of Heaven's Pillar, The Cross and the Dragon

Queen Hildegard, Charlemagne’s third wife, is portrayed as beautiful, pious, intelligent, and benevolent. But don’t let those virtues mislead you into thinking she was a sweet, little flower. Although young, she knew how to wield influence and had savvy a veteran politician would envy.

I encountered Hildegard during research for my novels, and she has a presence in all of them. In The Cross and the Dragon, she is Alda’s friend. My heroine looks to Hildegard’s marriage as the way husband and wife should treat each other and envies the queen’s fertility while she struggles to conceive. My Saxon peasant family in The Ashes of Heaven’s Pillar watch her haggle with a merchant, and Deorlaf, my heroine’s son, entertains the royal family when he is part of a merchant party.

Queen of the Darkest Hour starts shortly after Hildegard’s death. My heroine, Queen Fastrada, compares herself to her predecessor, wondering if she’ll measure up and burdened with the knowledge that a woman she had admired would not approve of the marriage. The thoughts and feelings are my speculation, but Hildegard might have preferred her widower have concubines rather than marry again. Her reason is inherent to noble families: she wouldn’t want her husband to sire a rival to her sons’ inheritance, one she worked to secure. 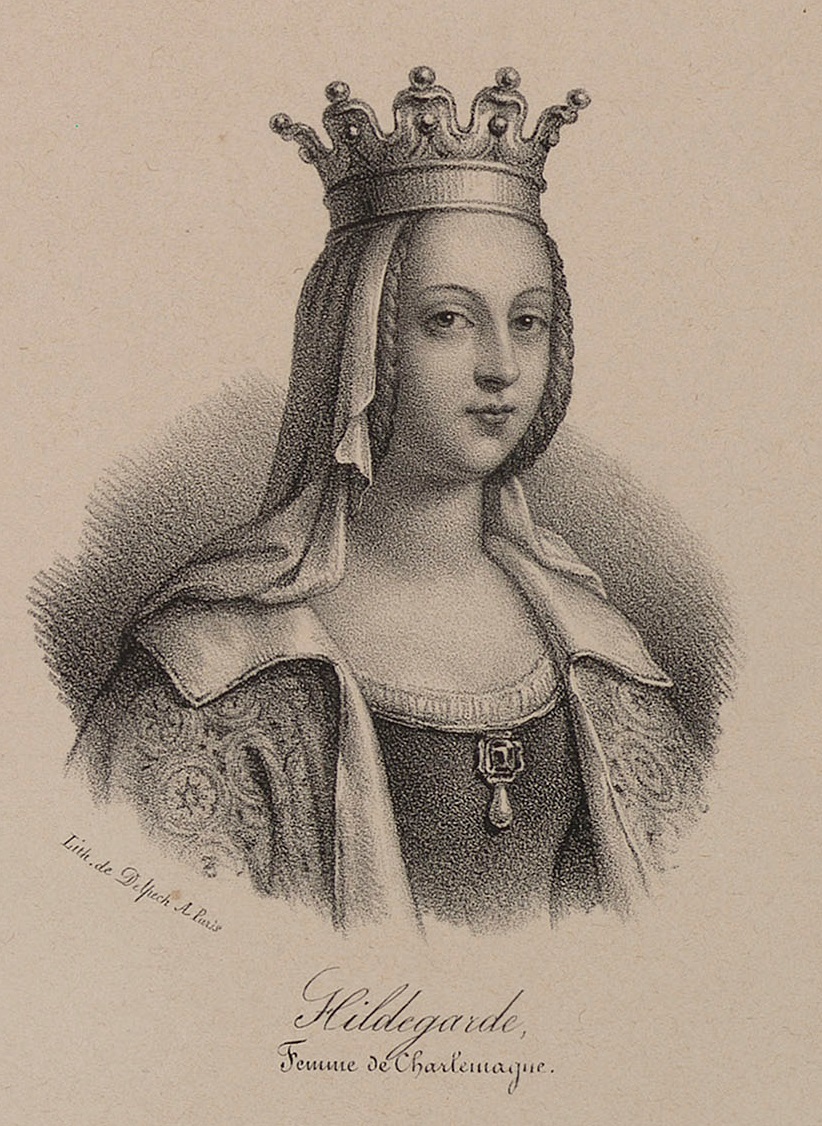 As with many early medieval queens, little is written about Hildegard. She was probably 13 or 14 when she wed Charles in 772. Although they were fond of each other, the marriage was foremost a political alliance. She came from the Agilolfing clan, one of the most established and prestigious in the realm, and was a kinswoman of the duke of Bavaria (who also was Charles’s first cousin). Hildegard’s family controlled lands in a part of the kingdom ruled by Charles’s brother, Carloman, who had died in the previous year. Charles took over his brother’s former kingdom, and his marriage to Hildegard made that possible.

No matter that Charles was already married to a Lombard princess. His repudiation of her enraged the Lombard king—and likely Queen Mother Bertrada, who had negotiated Charles’s marriage to the Lombard. Hildegard was joining a household with a (possibly) irritated and (definitely) strong-willed mother-in-law, a husband who had divorced two wives, a 3-year-old son named Pepin from Charles’s first marriage, courtiers like Adalhard who disapproved the repudiation and remarriage, war with the Saxons underway, and another war with the Lombards on the horizon.

She succeeded against all these obstacles. It helped that she conceived quickly and bore her first son, Charles (whom I call Karl in my novels), in late 772 or early 773. The birth of a healthy heir solidified her position as queen. During her 11-year marriage, she would bear nine children, six of whom—three sons and three daughters—survived to adulthood.

She and Charles might have been a like-minded couple. He certainly wanted her around. He would send for her to join him, even when he was at war in Lombardy, and she often traveled with him. Might they have shared aspirations for an empire? Did she play a role in bringing foreign scholars to his court? Maybe.

In 781, we see Hildegard’s power. In Rome, she witnessed her middle son, 4-year-old Carloman, be baptized and renamed Pepin, even though Charles had a child by that name. The younger Pepin (whom I call Carloman in my first two novels and Little Pippin in Queen of the Darkest Hour) and her youngest son, 3-year-old Louis, were named subkings of Aquitaine and Italy. Her daughter Hruodtrude, was betrothed to another child, the Byzantine emperor (his mom was regent). Like most medieval noblewomen, Hildegard was ambitious for her children, making sure her offspring, and not another woman’s, would succeed her husband.

Hildegard’s life was short. Those multiple pregnancies might have taken a toll on her health. She was in her mid-20s when she died in 783, shortly after the birth of her ninth child. Charles would endure more personal losses that year. The baby, named after her mother, lived only 40 days, a death Paul the Deacon described as “stabbing your father’s heart with a dagger.” On top of that, Bertrada passed away.

No doubt Charles was heartbroken, but he could not take a break from his responsibilities. He was still at war with the Saxons to the east and needed to bolster alliances with that part of the realm, and a few months later, he married Fastrada, an East Frank.

Fastrada and Charles were fond of each other, even though she was controversial (the reason I wrote Queen.) Yet Charles maintained his alliance with his late wife’s family. Hildegard’s brother, Gerold, played an important role when Charles ousted the Bavarian duke and warred with the Avars. Hildegard’s influence lived on.