Walafrid Strabo’s 9th century On the Cultivation of Gardens, commonly called Hortulus, is a gem. It stands out among early medieval accounts of royal conquests and saints’ lives.

Most writers of Walafrid’s time would have thought gardening too mundane. If you read only this poem, you might not guess Walafrid was a scholar, a tutor to one of Charlemagne’s grandsons, the abbot of Reichenau, and a diplomat. He was a Swabian commoner who had been at Reichenau since age 8 and apparently had a lifelong love of gardening.

He tells his readers if they’re not afraid to get calluses on grubby hands, haul cow manure to parched soil, and work hard, they can make even gravel and sand yield herbs and produce. Some of his verses have a familiar feel. The plot he wants to cultivate is overtaken by weeds, stinging nettles in fact, and mole tunnels need flattening.

Walafrid describes the plants’ looks and fragrances, refers to Roman mythology (and is sometimes confused), and goes off on a tangent about free trade. He has special praise for the lily and the rose. But most of this poem is about the healing properties of the plants. From the ninth century point of view (pretty please with sugar on top note the disclaimer), horehound is an antidote to poison an evil stepmother might slip into food. Agrimony with sharp vinegar can be used to heal open wounds. Poppy causes oblivion and heals a bad ulcer in the chest. Catmint mixed with rose oil can restore skin and hair. Lily will counteract a snakebite and treat bruises. Various herbs can help with digestive problems and coughs.

If you want to read this delightful poem, I highly recommend James Mitchell’s 2009 translation.

When I first encountered these illustrations of 8th century Lombard King Desiderius and his world, I wondered where they came from.

Oh, I knew they weren’t historically accurate, but I gave up on that when I started blogging in 2011. Blog posts are better when they have images. They add interest to the text and help when writers are promoting their work on social media.

My problem as a 21st-century author: 8th century artists were more interested in saints and other religious figures. Even contemporary images of Charlemagne are hard to find. Since then, artists have been more interested in the story they’re trying to tell than being true to the facts. The one who created these images is no exception.

These images appeared to be from the 19th century, and it turns out I was right. Thanks to Wikimedia Commons, I finally know their origin. They are indeed illustrations for Alessandro Manzoni’s 1822 tragedy Adelchi (which also take liberties with the facts). The book they appear in was published in 1845. Here is one of the full pages, via Wikimedia Commons, with all its lovely flourishes. 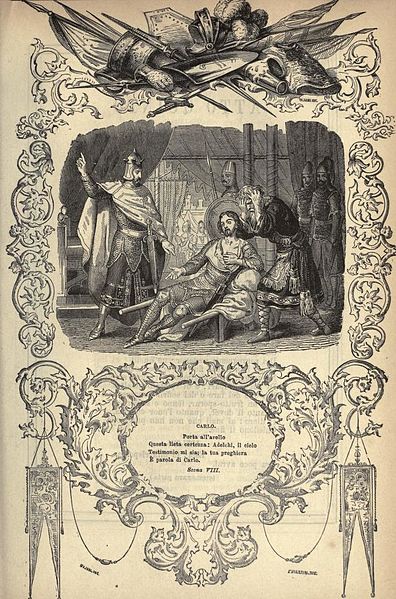 I felt a thrill as I (virtually) turned the pages and beheld the images. At least one mystery was laid to rest.

Charlemagne’s friend Abbot Angilbert transformed the monastery of St. Riquier into an early medieval center for learning. He donated 200 manuscripts, acquired a lot of relics and set up altars for them, and bought expensive lighting, among other things. Too bad my characters in The Ashes of Heaven’s Pillar visit the place in 778, 12 years before Angilbert’s appointment.

There is little information about the monastery before Angilbert ruled it and its origin compounds my dilemma on how to portray it.  Influenced by Irish missionaries, Saint Richarius founded it around 625, which meant he likely followed the Rule of Saint Columbanus rather than the Rule of Saint Benedict. Columbanus was more austere, and the Celtic practice had a different tonsure and a different liturgical calendar.

As a novelist, I had questions to answer. Whose rule do the monks follow? What relics do they use? What does the reliquary for their founder look like?

Authors of historical fiction have more than one right answer. Because a novelist is not a scholar, I side with those who think it’s OK to play with facts. If making the monastery a center for learning 12 years earlier best serves the story, a writer can do so and disclose that liberty in an author’s note.

My illiterate characters in Ashes don’t care if St. Riquier is a center for learning. They know books are valuable and will pray before relics, but all they really want is to trade goods with the abbot and have a safe place to sleep and rest their animals. For Ashes, I decided to make my best guess of what the monastery was like at the time. So St. Riquier doesn’t have all those books in the library or so many relics or the silver and gold rings to hold candles. Eighth-century monasteries likely followed the Benedictine rule, so St. Riquier does, too. The founding saint rests in a tomb rather than a golden reliquary.

The relic my characters swear upon for a trial is not entirely made up. A tree Saint Richarius like to rest under existed in the 8th and 9th centuries, and it was not to be chopped down. Twigs and branches fall from trees, and one of those pieces of wood is perfect for what I and my characters need.