Those two questions arose in my mind during my research for my debut novel, The Cross and the Dragon, a tale of love amid the wars and blood feuds of Charlemagne’s reign. As I looked into the history of this era, two things caught my attention:

I had to let this information rest in the back of my mind while I wrote a novel from the perspective of Frankish Christian aristocrats who had their own difficulties to contend with. Novels by their very nature immerse readers in the world of the characters. For the story to feel real, readers must see events through people with their own virtues and flaws, beliefs and biases.

But that also means excluding other points of view. This causes a bit of tension for me. During my nearly two decades in journalism, I valued fairness and telling all sides of the story, especially from people not in power. 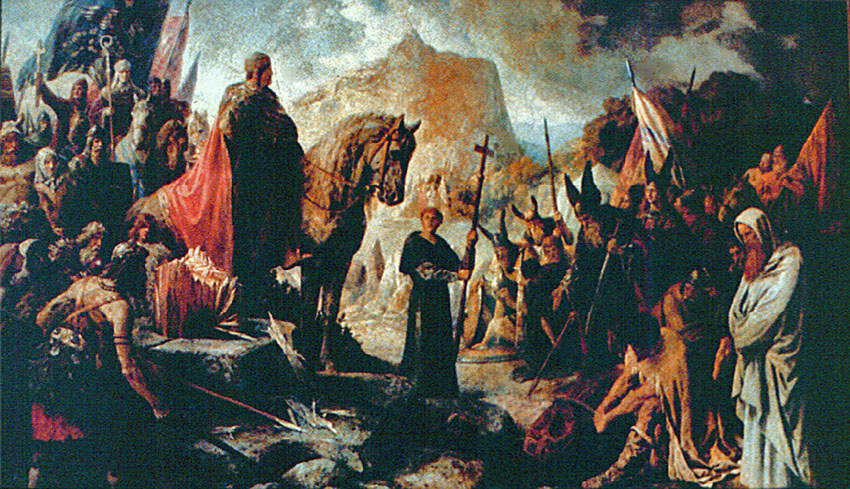 A 19th century mural by Hermann Wislicenus, depicting the destruction of the Irminsul (public domain, via Wikimedia Commons)

The pagan Continental Saxons fit the definition of underdog. They are history’s loser. After more than 30 years of war off and on and brutality on both sides, Charlemagne’s Franks subjugated them. In addition, the Church did everything it could to obliterate the religion, which it considered devil worship, and the Continental Saxons did not have a written language as we know it.

Even on the Frankish side, literacy was limited. The annals, letters, and other documents concern themselves mainly with the affairs of royalty and saints. Pagans are depicted as brutes, war captives are treated like war booty, and peasants are rarely mentioned at all.

That urge for fairness is one reason an imaginary Saxon peasant family sold into slavery insisted I tell their story as I was trying to figure out my second novel. Originally secondary characters, they hijacked my plot.

The result: The Ashes of Heaven’s Pillar, which depicts many of the same historical events as my debut but from the views of a pagan mother and her two children. My heroine, Leova, must grapple with why the gods let the Irminsul burn and how to protect her children when she’s lost everything—her husband, her home, her faith, even her freedom.

Here, historical fiction fills a gap. It might be the only way to see early medieval history through the eyes of pagans and peasants.

This post was originally published March 31, 2014, on Reading the Past.