I am happy to welcome Barbara Gaskell Denvil to Outtakes as she rereleases Fair Weather, a novel about a dream-haunted writer who time-travels to 13th century London, which has a dark, mysterious, and sometimes dangerous hero. Here is her essay about her love for history, both the good and the bad.—Kim

We owe so much to the long struggle of those who lived, suffered, and battled in the past, who strived to achieve their best, and finally died within their own developing lands and the limitations and restrictions of their society. Whatever level of civilisation we can now claim, is all thanks to those long gone. Past religious barriers and bias have led to our modern religious tolerance and freedom. Past prejudice and ignorance has led to our growing sexual equality. Past levels of poverty and suffering have led to our higher standards and increasing comforts. We are who we are, because of those who lived and fought in the past.

As the author of historical fiction, I do not denigrate those who struggled long ago by denying their pain. In my books, I do not avoid the misery and difficulties. I do attempt to describe accurately the life and times of those who died in terrible circumstances. Yet we all tend to over-romanticise the past, and I see nothing wrong with this either. So much remains a mystery, and until they invent a time-machine—please, please, can I have the first ticket?—we cannot really be sure what any famous character was like or how people actually lived.

But should we look away from the shadows? I have read many books which describe the plague as little more than a sneeze before dropping dead, so ignoring the truths of that absolute horror. Executions, for instance, were brutal affairs conducted in public. How people could ever have wished to watch a hanging and quartering, I cannot imagine—or the burning alive of a heretic. But these things happened and I will honour the victims by not ignoring their agony in my books. 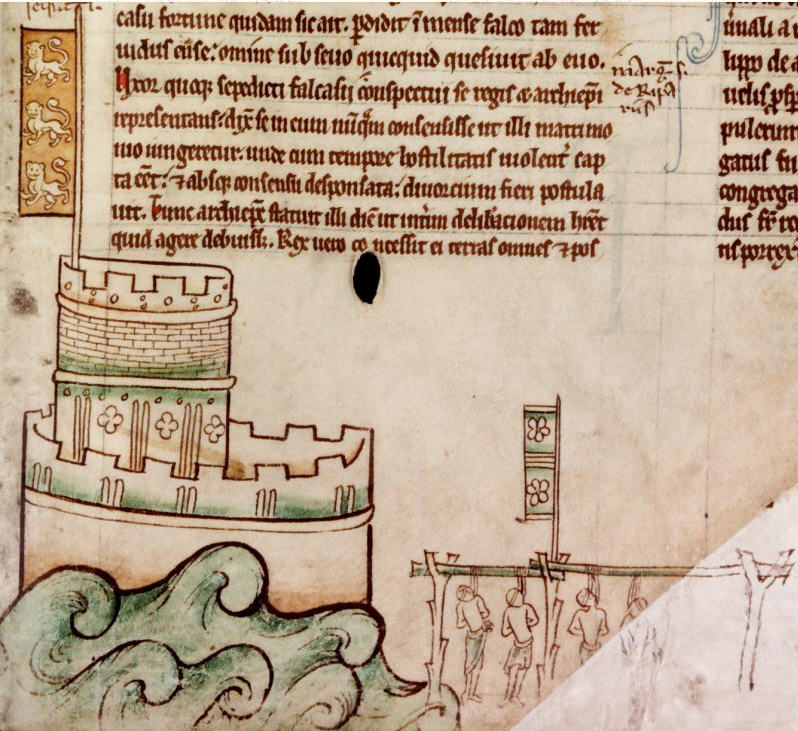 Matthew Paris’ depiction of the siege of Bedford Castle and the execution of its garrison (1224) (public domain, via Wikimedia Commons)

So I face both the pain and the pleasure. I imagine food tasted better and more natural—and yet it could cause dysentery and death. Clothes were more beautiful, but they were also extremely expensive. Ordinary people could afford only a simple tunic. The four-poster bed looks amazing and many of us dream of sleeping in one. Yet feather mattresses were lumpy and often damp, were a terrible job to turn, and even in Georgian times, the poor slept only on straw. Castles were impressive and not the bare crumbling ruins we see today. They were plastered inside, hung with tapestries, their vaulted ceilings and beams often carved or painted. But they were also draughty, and the fires smoked appallingly. As for toilets and clean running water? Well, you already know, I’m sure!

So my books do not skim over the wonder or the horror, and I want to take my readers by the hand and lead them through those cobbled lanes, sit by the guttering candle flame, smell the great throbbing cities, gaze at the soaring cathedrals, and follow the ordinary people who cope with the glory and the sorrows of centuries now gone.

My new novel Fair Weather does all of this and more, for it is a time-slip story, and so I am able to compare past and present through the eyes of my heroine, who travels back, and then of my hero—who travels forward.

Molly just wants to sleep at night, but the dreams won’t leave her alone. The light goes out, while distant echoes of thunder diminish into the night. Molly has dreamed of it before, but this time her eyes are open and she’s wide awake. The man is bending over her but she can only see his shadow.

Then everything changes. It is a world of buzzing chatter, markets, the calls of birds, bright sunshine, and the cobbled alleys of old London. But when Molly turns and blinks, everything dissolves into shadows once more. And she hears the siren of police cars, and they are coming closer.

An identical murder in the distant past of her dreams joins the two worlds in equal danger. Molly travels time but is followed by some horror that kills and mutilates at will. And the man, his voice the rustle of dead leaves, is always there. Yet Molly discovers far more than fear and misery. She discovers a whole new life, and a love she could never have imagined. She no longer wants to return—but she must.

Born in England, Barbara grew up amongst artists and authors and started writing at a young age. She published numerous short stories and articles, and worked as an editor, book critic, and reader for publishers and television companies. She broke off her literary career to spend many hot and colourful years sailing the Mediterranean and living in various different countries throughout the region.

When her partner died, she needed a place of solace and came to live in rural Australia, where she still lives amongst the parrots and wallabies, writing constantly, for her solace has now become her passion.

With a delight in medieval history dating back to her youth, she now principally sets her fiction in medieval England. She also writes fantasy, tending towards the dark. Within these two genres, she now writes full time.

You can connect with Barbara on her website or her Amazon author page.