In this installment on the history of atom theory, physics professor (and my dad) Dean Zollman discusses how two separate teams an ocean apart proved Louis de Broglie right about matter sometimes behaving as waves rather than particles.—Kim

In the last post, I discussed Louis de Broglie’s radical hypothesis that matter sometimes behaved as waves. De Broglie did not have any direct evidence for his theory. However, he was able to show how his ideas could be connected to Niels Bohr’s model of the atom. Once de Broglie introduced these ideas, both theoretical and experimental progress occurred rather quickly. In this post, I will discuss the experiments that were able to conclude that de Broglie was right. Next time, we will look at the major theoretical advance in the 1920s. (This approach is not quite chronological, but many things happened and influenced each other over a short time.)

To observe interference experimentally, we need to arrange for waves to move along two different paths and then meet. The distance that each wave travels determines the type of interference. In one method, the wave goes through two openings simultaneously and then combines. In another, the waves reflect off two surfaces that are very close to each other.

This second method is more common in everyday life. When you look at a soap bubble or at a puddle with a thin layer of oil on it, you frequently can see colors, with each color at a different location. The colors are created by some light reflecting from the top of the oil and interfering with light that travels through the oil and reflects from the water. The colors appear because each color has a different wavelength and thus constructive interference occurs at different places. Light passing through opening is less common in everyday life. Although, you may have seen an interference effect by looking at light through a fine lace curtain.

Interference on a soap bubble (by Cosmic73, Creative Commons BY-SA 4.0, via Wikimedia Commons) 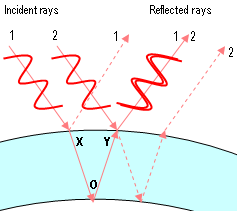 Paths of light for a thickness of a bubble where red light interferes constructively (Theresa Knot, GNU Free Documentation License via Wikimedia Commons) 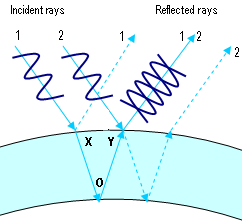 Paths of light for a thickness of a bubble where blue light interferes destructively (Theresa Knot, GNU Free Documentation License via Wikimedia Commons)

Animation showing light passing through two openings and interfering as the light from the two openings meet. (By Lookang, with many thanks to Fu-Kwun Hwang and authors of Easy Java Simulation: Francisco Esquembre, CC BY-SA 3.0, via Wikimedia Commons)

To show that particles have wave properties, physicists needed to observe some type of interference with particles. Then, they would need to compare the results of the interference with de Broglie’s predictions. The most logical particle to start with was the smallest one known at that time—the electron.

The solution to this problem is to use crystals. In a crystal, such as table salt, the atoms line up in nice, neat patterns. The layers of atoms create surface from which waves can reflect while the spaces between atoms can be used for opening through which waves can pass. The distances between atoms in the crystal are the sizes we need to observe interference.

Two research efforts—one in the U.S., the other in the U.K.—independently worked on this experiment. In his Nobel Prize lecture one of the experimenters, Clinton Davisson, described the two locations as “… in a large industrial laboratory in the midst of a great city, and in a small university laboratory overlooking a cold and desolate sea.” The experiment in the large industrial laboratory used the reflection method while the one near the cold and desolate sea used transmission through small openings. Both involved crystals.

The effort in the United States took place at Bell Labs. This laboratory was established in 1925 by the old version of AT&T. Its general mission was to conduct research to improve communications. However, a large amount fundamental research also took place. Over many years, many important scientific discoveries were made at Bell Labs, and some significant devices which are now part of our everyday life (and not just telephones) were invented there. The Wikipedia article on Bell Labs lists these achievements and the Nobel Laureates who worked there.

Clinton Davisson (1881–1958) began working for Western Electric, a division of AT&T, during World War I. After the war, he remained with the company and joined Bell Labs when it was founded. Lester Germer (1896–1971) worked for Western Electric for just a couple of months before entering military service in World War I. During the war, he was one of the first airplane pilots to see action on the front. After the war and a short rest, he was rehired by Western Electric and assigned to work with Davisson. They were assigned projects to look at some aspects of metals that were used in parts of the telephone company’s amplifiers. One aspect of this work involved shooting electrons at the metals. They were looking at how the electrons bounced off metals to better understand the metals’ properties. (Physicists use the phrase elastic scattering of electrons rather than bouncing off.) Wave behavior of electrons were not part of the research agenda. And for a while, they did not see any such behavior.

Clinton Davisson (left) and Lester Germer in 1927 hold the apparatus that they used to detect electron interference (public domain via Wikipedia Commons).

Here’s a schematic drawing of the Davisson-Germer experiment. The electrons’ speeds are set by the apparatus in the lower left. The movable detector looks at the number of electrons coming off at different angles (by Roshan, CC BY-SA 3.0, via Wikimedia Commons).

Davisson described how they became interested in looking at the details of the electron scattering. “Out of this grew an investigation of the distribution-in-angle of these elastically scattered electrons. And then chance again intervened; it was discovered, purely by accident, that the intensity of elastic scattering varies with the [angle].” This change in intensity with angle was much like the different colors of light appearing at different angles when it reflects from the surfaces on a bubble. The phenomenon implies an interference pattern.

As Davisson and Germer investigated the scattering of electrons from crystals, they completed 21 different experiments. For each experiment, they could accelerate the electrons to a speed that they knew. So they also knew the electron’s momentum. In turn, they could calculate the wavelength of the electron and determine at which angle the constructive interference should occur. They compared their results for angle of the maximum number of electrons with the angle predicted by using de Broglie’s wavelength. For 19 of the experiments, their results matched extremely well with the wavelength predicted by de Broglie.

At about the same time George P. Thomson (1892–1975), son of the J.J. Thomson, who discovered the electron, was conducting a similar investigation in Aberdeen, Scotland. His experiment involved transmitting electrons through a crystal. In his Nobel lecture, Thomson said, “A narrow beam of [electrons] was transmitted through a thin film of matter. In the earliest experiment of the late Mr. Reid, this film was of celluloid, in my own experiment of metal. In both, the thickness was of the order of 0.000001 cm. The scattered beam was received on a photographic plate … and when developed showed a pattern of rings … An interference phenomenon is at once suggested.”

The picture below shows the result of a modern version of Thomson’s experiment, one that is done by many college physics majors. The light and dark circle are locations where constructive and destructive interference of electrons (respectively) occur.

A modern version of Thomson’s experiment shows rings similar to the ones that he saw in his photographs (by And1mu, CC BY-SA 4.0, via Wikimedia Commons).

The results indicated that electrons had wave-like behaviors. As with the Davisson-Germer experiment, Thomson accelerated the electrons to a speed that he knew very well. So he could use de Broglie’s hypothesis to determine the wavelength. Using that wavelength, he predicted where the bright rings should occur in the photographs. The agreement between predictions and measurements were “within 1 percent.” G.P. Thomson had shown that indeed electrons behaved as waves.

These two experiments definitively established the wave behavior of matter. This behavior is at the foundation of most of contemporary physics and is critical to the development of many devices that today we take for granted. However, measuring the wave behavior was just one important step. Next time, we will look at the major theoretical advance that was underway at about the same time as these experiments.

‘A First Feeble Ray of Light’ to Explain Electrons’ Orbits