In this installment on the history of atom theory, physics professor (and my dad) Dean Zollman explains the science behind Bohr’s Model of the Atom. As so often happens in science, Bohr’s work contributed to our knowledge of matter in its tiniest parts, but more questions arose. – Kim

Last time, I discussed the historical perspective on the development of the Bohr Model of the Atom. This discovery is critical to the development of the modern quantum view of matter. So, this time I deviate some from the historical approach and discuss the physics of Niels Bohr’s model. Understanding the ideas that go into the model is not complex. Bohr’s genius was putting all of the parts together and adding one critical assumption.

Bohr had a large foundation on which to build. He knew:

To these concepts, Bohr added:

These ideas built on those of others, but Bohr applied them in a unique way.

Limiting the electrons to certain orbits was the critical step. Bohr knew that an electrical charge moving in a circle should radiate light continuously. Such a process would result in all colors of light being emitted, and the electron crashing into the nucleus in a very short time. He needed a reason for the atom to be stable.

To create that situation, he assumed that the electron could have only certain values for its angular momentum. The angular momentum for an object traveling in a circle is its mass times speed times radius of the circle. Bohr’s assumed that this quantity had to be an integer number times Planck’s constant divided by 2 pi. While moving in these allowed orbits, electrons do not emit any electromagnetic energy.

In proposing that electrons move only in allowed orbits, Bohr was suggesting that the energy of the electron can be measured, or quantized. In any given orbit, an electron has a certain amount of kinetic energy associated with its motion and electrical potential energy associated with the electrical force of attraction exerted by the nucleus. If electrons move only in allowed orbits, their energy takes on selected, or discrete, values. Bohr saw the same quantization of energy in the atom that Planck saw in the radiation emitted by solids and Einstein saw in the photoelectric effect. At the atomic level, energy appears in discrete amounts.

Measuring How Light Is Absorbed or Emitted

To make these ideas quantitative, Bohr combined this idea with the equations for energy of an orbiting electrical charge and Newton’s Laws. After some algebra, he had an equation for the values of the possible energies that an electron orbiting a hydrogen nucleus could have. The light was emitted or absorbed when the electron moved from one orbit to another. So the energy of the photon was equal to the difference between those energies. To obtain the frequencies of light emitted or absorbed by hydrogen atoms, Bohr applied the Planck-Einstein energy of a photon.

An animation of photon of light being emitted and absorbed by a Bohr atom (by Kurzon, CC BY-SA 3.0, via Wikimedia Commons)

The energies associated with each allowed orbit provide a useful way of describing what happens as atoms absorb or emit light. The energy-level diagram below provides a convenient way to describe the energy emitted or absorbed by a hydrogen atom. The lowest red line is called the n = 1 energy and corresponds to the energy of an electron when it is moving in the smallest orbit, the orbit closest to the nucleus. This is often referred to as the ground state of the electron because it represents the smallest energy the electron can have. The n = 2 line corresponds to the energy the electron has in the next orbit, n = 3 in the third orbit, and so on. Collectively, the energy levels above ground state are called excited states. The energy of the electron increases as we move to higher excited states.

An energy level diagram for the emission of ultraviolent and visible light from hydrogen. (Created with a program from the Visual Quantum Mechanics project, Dean Zollman, principal investigator)

The distance between states is proportional to the energy difference between states. So, for example, the energy difference between n = 3 and n = 2 is smaller than that between n = 2 and n = 1. The blue arrows in the energy level diagram indicate that the electron has changed energy from an excited state to a lower energy state. At the top of the diagram is the spectrum of hydrogen. The lines indicate the colors that would be emitted by these changes. All of the photons emitted by changes to the n = 1 energy are in the ultraviolet and are drawn in gray on the right side of the spectrum. The transitions to the n = 2 energy are visible and shown by their approximate colors. These are the spectral lines that Balmer saw.

A schematic using the Bohr Model of transitions for orbiting electrons.  (From Nusha, GFDL or CC-BY-SA-3.0, via Wikimedia Commons)

In a sample of hydrogen gas at room temperature, each atom is most likely to have its electron in its ground state. An external source – heat, light, or electricity – can provide energy to these electrons. When we pass white light through a sample of hydrogen gas for example, electrons “select” photons of energy needed to move into excited states.

As shown in the diagram below electrons might move from n = 1 to n = 2, from n = 1 to n = 3, from n = 2 to n = 3, and so forth. Because the energy levels are the same as for emission, the only change in the diagram is the direction of the arrows. The electrons are moving from lower energy to higher energy. The photons with energies equivalent to each of these jumps are absorbed while the others are ignored. Consequently, the light that emerges is the full spectrum minus the photons with frequencies used to move electrons into excited states. We see a discrete absorption spectrum.

An energy level diagram for the absorption of ultraviolent and visible light by hydrogen. (Created with a program from the Visual Quantum Mechanics Project, Dean Zollman, principal investigator)

One of the successes of Bohr’s model is that he could calculate the energies of all of the levels in the hydrogen atom. The n = 1 (ground state) energy is -13.6 electron volts. (The minus sign is a notation to indicate that the electron is being attracted to the nucleus.) The next one, n = 2, is -3.4 electron volts. In general the energy of the nth level is -13.6 eV/n2. (An electron volt (eV) is a very small unit of energy used in atomic physics.) Bohr was able to obtain these numbers by doing some algebra and getting a result that depends only on constants such as the electrical charges on the electron and proton and Planck’s constant. Likewise, he could determine the radius of the hydrogen atom. He did not need Balmer’s data from observations. So, he had a model that seemed quite complete.

In addition to explaining the discrete spectra found for chemical elements, Bohr’s model also resolves the problem of why atoms do not collapse. The electron can lose only specific amounts of energy equivalent to the jumps in the energy-level diagram. When it reaches lowest energy, the electron can neither lose more energy nor move closer to the nucleus. The stability of the atom is assured. Bohr’s model of the atom moved several pieces of the atomic puzzle into place. It did, however, leave some questions unanswered.

While the concept of allowed orbits explains both the stability of the atom and discrete emission and absorption spectra, it is not based on any known principles of physics. There seems to be no reason for electrons to jump instantaneously from one energy state to another, shunning all energies in between.

Furthermore, additional observations revealed limitations to the model. While it was enormously accurate in describing the hydrogen spectrum, Bohr’s model was far less successful in describing the spectra produced by more complex atoms. Moreover, the intensity of individual spectral lines varied. Some lines were brighter than others – an observation for which Bohr’s model offered no explanation. The resolution to these problems lay in yet another model of the atom – the quantum mechanical model. We will move toward learning about it next time. 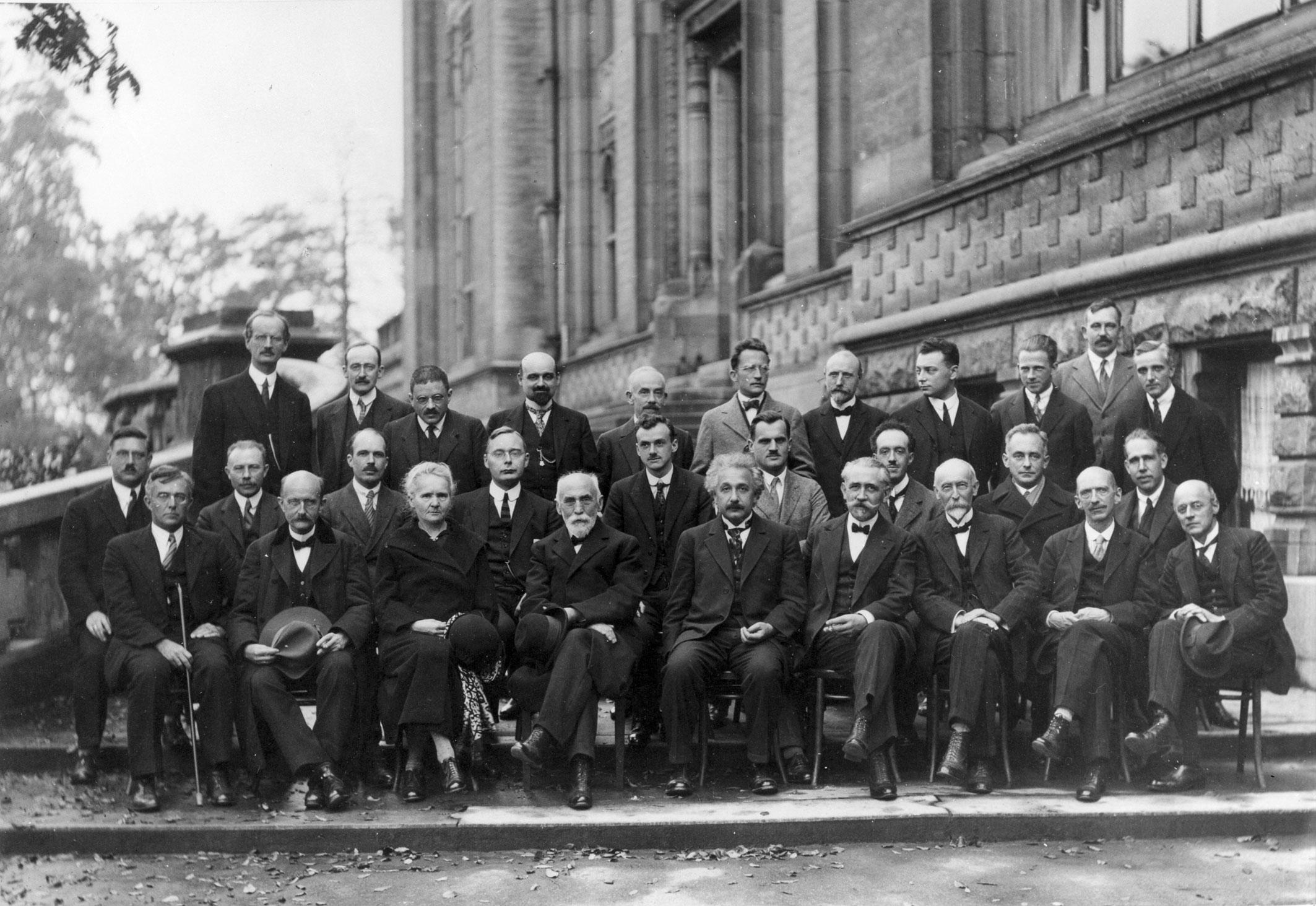 In 1927, the world’s top physicists met at a Solvay Conference to discuss issues related to quantum physics and the atom. Niels Bohr is on the far right in the second row. Physics was very much a European man’s occupation in those days. The only woman participant was Marie Skłodowska Curie, third from the left on the front row. An American, Arthur Compton, is the third person to the left of Bohr. (Public domain via Wikipedia Commons. For an annotated, interactive version go to Wikimedia Commons.)

Much of the material in this post was adapted from Fascination of Physics by Spears and Zollman. It is used by permission.