In this installment on the history of atom theory, physics professor (and my dad) Dean Zollman discusses how Ernest Rutherford and his teams experimented to see whether atoms were more like plum pudding or a planet with moons.—Kim

The scientific models of the atom that we considered last month are quite different from one another. Of course, all of them are attempts to describe objects that we cannot see. So, early 20th century scientists needed to find some indirect method to probe the atom. Some indirect evidence about the atom such as the light emitted from them was available. But all of models explained these observations about equally well or equally badly. A creative new approach was needed.

We have already met the person who would provide that creativity—Ernest Rutherford, who had named alpha and beta radiation. You might remember that Rutherford grew up in New Zealand and came to England to be the graduate student of J.J. Thomson. He did his early work on emissions from the nucleus at McGill University in Canada. He returned to England to become a professor at the University of Manchester. Rutherford’s predecessor Arthur Schuster (1851-1934) had hired an outstanding experimenter, Hans Geiger (1882-1945). Geiger became Rutherford’s assistant and built a very fruitful collaboration.

Rutherford worked in a different mode than most scientists of his or earlier times. Instead of working in relative isolation with at most a few assistants, he assembled teams of scientists, many with doctorates. These teams would conduct research under Rutherford’s direction. This mode of doing science anticipated the modern team approaches by 50-60 years.

Ernest Rutherford in his laboratory, about 1905 (used under Creative Commons Attribution 4.0 International via Wikimedia Commons).

At McGill, Rutherford had focused much of his energy on investigating the changes in elements that emitted radioactive particles. In Manchester, he switched to investigations about the objects that were being emitted, particularly alpha particles.

One of the first issues that he tackled was the nature of alpha particles. From previous work, Rutherford suspected that alpha emissions were similar to helium atoms. However, he was a very thorough scientist and wanted to confirm his suspicions before publishing the results. Working with Thomas Royds (1884-1955) in 1908, he collected alpha particles in a sealed container. They then passed an electric spark through the container.

Rutherford and Geiger began working on ways to detect the alpha particles. William Crookes (1832-1919) had noticed that when alpha particles struck zinc sulfide a very small flash of light was emitted. This phenomenon was verified by Julius Elster (1854-1920) and Hans Geitel (1865-1923). The process is somewhat similar to the way old-style TVs create pictures.

In the TV, electrons hit the screen and cause light to be emitted. However, the light that was emitted from the impact of a single alpha particle with the zinc sulfide was extremely dim. Rutherford and Geiger devised a scheme so that the light could be seen and the number of alpha particles striking the screen could be counted.

A second method involved a gas filled tube with a voltage on two wires. The voltage was sufficiently high that it would almost cause a spark. When an alpha particle passed through the gas, it would create a spark, which could be registered on a meter. This instrument would be later developed into the Geiger-Muller counter. In some of these counters, a speaker would click with each alpha particle. These clicking Geiger counters appear in many 1950s science fiction movies. 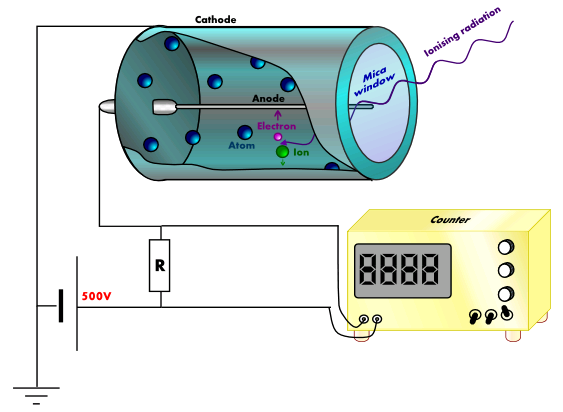 The basic function inside a Geiger-Mueller tube: the cathode is negative; the anode, positive. When ionizing radiation such as an alpha particle enters the tube, a spark occurs and is counted (used under the Creative Commons Attribution-Share Alike 3.0 Unported licence via Wikimedia).

With all of this data about the alpha particle, Rutherford had enough information to use it to probe the atom. He knew the mass and the electric charge. He also knew how to measure where an alpha particle was.

When I introduce this concept in a class, I hide an object behind a screen. Then, I shoot table tennis balls at it. The students are challenged to determine as much as they can by looking at how the balls bounce off the object. This process is called a scattering experiment because we are trying to learn something about an object by looking at how small particles bounce off (or scatter from) it. Doing it with alpha particles is now called Rutherford scattering.

For detecting the location of the alpha particles after the scattering, counting small blips of light was the more accurate method. He arranged a radioactive source of alpha particles behind a lead shield with a small hole in it. Alpha particles could pass through the hole but not the rest of the lead. So, a small beam of alpha particles was available to collide with something. Rutherford chose to direct the beam at a very thin foil of gold. He would then have a student look at a zinc sulfide screen through a microscope.

The student who got to perform this experiment was Ernest Marsden (1889-1970). By varying the angle at which Marsden observed the screen he could see how the gold atom caused the alpha particles to change their direction. This drawing indicates how the actual apparatus may have looked.

The experimental apparatus used by Marsden and Geiger. The zinc sulfide screen is on the inside end of the microscope. The microscope could be moved to look at different angles relative to the incoming beam of alpha particles (by Kurzon, licensed under the Creative Commons Attribution-Share Alike 3.0 Unported via Wikimedia).

The diagram below shows the basic idea in a schematic form. The alpha particles come in toward the gold foil. After they pass through the foil, they may be moving in a different direction than when they entered. By moving the microscope around the foil, Marsden could count how many came off at each angle.

The experimental arrangement for probing the atom (by Kurzon, licensed under the Creative Commons Attribution-Share Alike 3.0 Unported via Wikimedia).

Differing Recollections about Motivation But…

At this time the prevailing model of the atom was the “plum pudding” model that we discussed last time. Because the electrons and positive charges were somewhat uniformly distributed in the model, Rutherford’s expectation was that the alpha particles would travel through the gold with some small changes in their motion. For a while, Marsden looked for the small deviations from the incoming path. Most of the alpha particles were deflected through small angles; a large fraction were not deflected at all.

At some point, a decision was made to have Marsden look for big changes in the motion. Much later, Rutherford recalled that he needed something for Marsden to do so he said to Geiger, “Why not let him see if any alpha particles can be scattered through a large angle?” This statement sounds a little like “We need to find something to keep Marsden out of the pubs and in the lab.”

Marsden remembered the story differently. He recalled, “Rutherford had been thinking over the matter, and he turned to me and said: ‘See if you can get some effect of alpha-particles directly reflected from a metal surface.”’ Independently of who said what, Marsden looked for very large changes in the alpha particles motion. He not only found something; he changed the way scientists think about matter!

To Rutherford this result was astounding. He said later, “It was quite the most incredible event that has ever happened to me in my life. It was almost as incredible as if you fired a 15-inch shell at a piece of tissue paper and it came back and hit you.”

Geiger and Marsden published a paper in June 1909 describing their results. However, at that time they could not explain their observations. Rutherford spent much time trying to understand how the atom must be constructed to give such a strange result. He worked toward a solid mathematical model which could explain the large scattering that they saw. Not until December of 1910 did Rutherford feel that he understood. His reasoning included:

The diagram below shows Rutherford’s conclusion and compares it with the result that would have been expected with the Thomson plum pudding model of the atom. To view a simulation of these two models with Rutherford scattering go to PhET.

The left side shows the result expected for the Thomson model; the right side is Rutherford’s conclusion about how the atom must look based on his experiment (By Kurzon, licensed under the Creative Commons Attribution-Share Alike 3.0 Unported license via Wikimedia).

Using a combination of Newton’s Laws of Motion and Coulomb’s Law for interactions among electrical charges, a Rutherford scattering equation can predict results for this type of experiment.

The net conclusion was that the atom had a very small, positively charged center (now called the nucleus). Most of the mass of the atom is located in this nucleus. Because overall the atom has no electrical charge, electrons must be outside the nucleus. Further, because most of the alpha particles passed through the gold unchanged, the distance between atoms must be large in comparison to the size of the nucleus. Matter seems to be mostly empty space.

So, this one experiment changed the way that scientists thought about matter. Instead of being a somewhat uniform “glob” of positive and negative charges, it was a concentrated massive positive charge surrounded by some very light electrons.

But there was a big problem. Why was this atom stable? Positives attract negatives. Further, acceleration charges radiate energy. Why does the electron not just spiral into the nucleus? We know that it does not because we exist. A possible explanation would be forthcoming. However, before we can try to understand that explanation, we need to go back to about 1900 and pick up another thread of reasoning about the nature of light. We will start that thread next time.

9 thoughts on “Did Busy Work Lead to Models for Atoms?”