In this installment on the history of atom theory, physics professor (and my dad) Dean Zollman delves into early efforts to build models of atoms.—Kim

At the beginning of the 20th century, models of the atom were being created. The atoms could not be seen, but a significant amount of knowledge was available to use as a foundation for a model. In particular, observations included:

A complete model of the atom should explain all of these observations. In this post, I will describe two quite different models of the atom. Each had its limitations, but one of them was more off-base than the other. Next time, I will discuss a definitive experiment that eliminated one of them and prepared the way for a major change in thinking based, somewhat, on the other.

Joseph J. Thomson (1856-1940) had first thought about how the atom might look when he used the idea that atoms were vortices in the ether. (See a post from a few months ago, “Even Scientific Dead Ends Can Contribute to Knowledge.”) That model led him to a study of cathode rays and the discovery of the electron, which I discussed in “Discovery of the Electron Took Decades and Multiple Scientists.” So, it was natural that Thomson would take these ideas and create a model of the atom based on the electron, one that is discussed in many chemistry and physics books.

The first thing that Thomson (and everyone else) needed to deal with was that ordinary matter does not have an electrical charge. Yet, Thomson and others had measured that the electron had a negative charge. So, something with a positive charge must be in every atom to balance the negatively charged electrons. Thomson speculated that the electrons were embedded in matter that had a uniform positive electrical charge. The drawing below shows the basic idea.

Thomson’s atomic model with electrons embedded in a uniform positive charge. (Released into the public domain by its author, via Wikimedia Commons)

Thomson’s model reminded many other scientists of the British dessert plum pudding. So it became known as the plum pudding model of the atoms. The plums (electrons) were scattered through the pudding (positive charge). If Thomson had been an American, we might have called it the raisin bread model. But he was British. As can be seen in this political cartoon, even long before Thomson’s time plum puddings were well know as models for other things.

When Thomson had written his first paper on the model that atoms were vortices in the ether, he had used the work of Alfred Marshall Mayer (1836-1897). As I said earlier, Mayer floated magnetic needles on water with a larger magnet held above them. For two to 20 magnetized needles, he looked at the stable configuration created by the attractive and repulsive forces of the small magnets in the presence of the larger magnet. When he looked at the results (see below), he saw some periodic behavior in the patterns. (You can watch a video of school students repeating this experiment.)

For his model of the atom that included electrons, Thomson imagined that the electrons in the “pudding” would repel each other in the same way that the small magnets did. So, an atom with three electrons would have an arrangement of negative charges similar to that shown in Mayer’s drawing. Most important were changes such as those shown going from five to six “electrons.” A ring suddenly becomes a ring with an electron at the center. Such changes could be reminiscent of the changes as one works through the periodic table.

However, Thomson went beyond this analogy. Using equations for the forces applied on each other by electrical charges, he calculated the configurations of electrons in his model of the atom. He was able to conclude that behavior similar to the periodic table could come from concentric rings of electrons. Early on, Thomson had speculated that every atom had thousands of electrons. They needed many to make up the mass. Thus, atoms with a large number of concentric rings were possible. Later, Thomson decided against the atom having “many thousands” of electrons.

To address the light spectra coming from atoms, Thomson needed the electrons to vibrate. By vibrating at appropriate frequencies, light could be emitted.

Radioactivity was difficult to explain. Thomson connected it to the vibrations of the electrons. He noted that as the electrons gave off light, they would gradually decrease their speed. At some critical slow speed, the system would explode. Then, “[t]he kinetic energy gained in this way might be sufficient to carry the system out of the atom, and we should have, as in the case of radium, a part of the atom shot off.”

Some of Thomson’s logic seemed a little weak. For example, his argument about radioactivity implied that all elements should be “shooting off” electrons. But they did not. Of course, the plum pudding model was just a beginning, so maybe further refinement would solve some of the issues. As we will see next time, a bigger concern was looming.

A Much Bigger Model for the Model 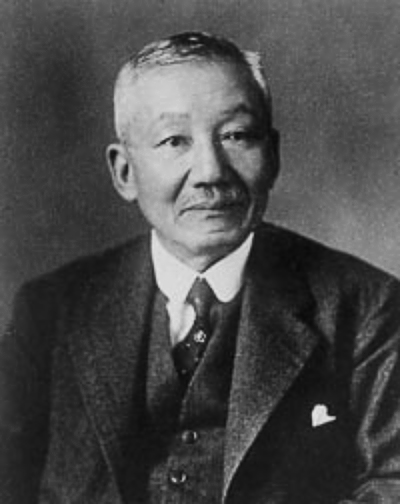 Hantaro Nagaoka (1865-1950), a physicist at the Imperial University of Tokyo, had a quite different idea about the structure of atoms. He used the planet Saturn as an analogy. With gravitation, all objects with mass are attracted to all other objects. Yet, Saturn’s rings are stable in orbit around the planet. In 1859, James Clerk Maxwell (1831-1879) had published On the Stability of the Motion of Saturn’s Rings, which provided a mathematical analysis of this stability even though the particles in the rings were being attracted to the planet. Nagaoka reasoned that similar logic could be applied to the electrons orbiting a positive core.

With reasoning very similar to Thompson, Nagaoka postulated that light was emitted from an atom when a “disturbance” occurred. Vibrations of the electrons caused the light to be emitted with spectra that had been observed. He concluded that some atoms could have several rings of electrons to be able to produce the complex spectra that were produced.

To explain radioactivity, he also relied on the disturbances in the atoms. He stated, “If the disturbance continues for a sufficiently long time, the ring will be torn asunder and the system will fly off with great velocity. If the particles are electrons, those in the rings will give rise to beta rays and the central positive charge will form alpha rays.”

So, he “explained” the existence of two types of radioactivity. Further, he argued that the disturbances would be more likely in heavier atoms than in light ones. He concluded, “This probably accounts for the remarkable radioactive property of radium.” While all of this sounded good, Nagaoka did not have solid mathematics behind his reasoning and speculations. His atom seemed to make as much sense and Thompson’s, but he was not able to put it on firm theoretical ground.

A few years later, British physicist John William Nicholson (1881-1955) developed the Saturn model of the atom further. He was able to connect it better to spectra and to the periodic table. However, based on the laws of electricity and magnetism, he concluded that atoms could not have only one electron. The stability of a ring of electrons required several electrons, at least.

There were other models in the early 20th century. They tended to fall into one group similar to Thompson’s in which the positively charged objects and the negative electrons intermingle in some fashion and another group similar to Nagaoka in which the positive and negative charges were separated but held together in an atom by the mutual electrical attraction. To decide which nature favored required a very careful experiment. That experiment, which we will look at next time, set the stage for atomic physics from then to now.

Post script: In researching for this post, I discovered a professional connection between me and Nagaoka. One of Nagaoka’s students was Hideki Yukawa. Yukawa was the PhD mentor for Carl Levinson. Levinson was my PhD mentor. So, in some way, Nagaoka was my great-grand-mentor.

11 thoughts on “The First Attempts to Visualize Atoms”