Charlemagne, Ganelon, medieval, Middle Ages, The Cross and the Dragon, The Song of Roland 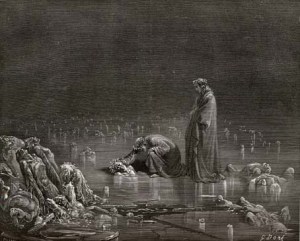 When Unusual Historicals sought authors to sign up for this month’s “Traitors and Turncoats” theme, Ganelon of The Song of Roland came to mind. His legacy as a traitor is so strong that two centuries after the poem was written, Dante envisioned him in the lowest level of hell, where it’s frozen over. His fate is not as awful as Judas’s but not by much (for more, see Tinney Heath’s guest post about Dante’s vision of Charlemagne and Roland in the afterlife).

Ganelon is perhaps named after a real ninth-century bishop who switched alliances among Charlemagne’s grandsons, but the character in the poem is fictitious. There was no traitor at the 778 ambush at the Pass of Roncevaux, nor were the perpetrators Muslim.

So I don’t feel so bad about making Ganelon a loathsome suitor to my heroine, Alda, but not a traitor. Having him commit treason didn’t serve my purposes.

But it sure served the purposes of the poet who wrote The Song of Roland in the late 11th century. Perhaps the poet was trying to say something about his country’s military superiority around the time of the first Crusade and draw religious parallels. Visit Unusual Historicals for more.

1 thought on “When Treason Serves a Literary Purpose”