Eighth-century writers can be inconsiderate to modern readers. They rarely describe what the people they’re writing about look like nor do they include images.

So the blogger often turns to later illustrations of their subjects. Such is the case with Desiderius, king of Lombardy in northern Italy and the subject of an upcoming guest post on Tinney Sue Heath’s blog, Historical Fiction Research.

Desiderius’s name may be familiar to readers of Outtakes and The Cross and the Dragon. He is King Charles’s ex-father-in-law, and in the early 770s, they fought a war. In an excellent scholarly article, “Pavia and Rome: The Lombard Monarchy and the Papacy in the Eighth Century,” Jan T. Hallenbeck analyzes the complexities that led to the war, which will be shared later.

Right now, I could use some assistance on information about the illustrations I’m considering for the post. Perhaps it is the former journalist in me, but I like to provide readers with information about the images themselves. When were they created? Who is the artist? My usual source for images, Wikimedia Commons, does a pretty good job of this most of the time.

Appearing to be from the 19th century, the images below might have illustrated Alessandro Manzoni’s 1822 tragedy Adelchi, which gets its name from Desiderius’s son Adalgis.

The first (I think) shows Adalgis after Charles’s victory. (In real life, Adalgis escaped to Byzantium during the war and tried to retake his kingdom.) The second shows Desiderius at court and the third, the Lombard camp.

If you can tell me something about any of these images, I would be most grateful. 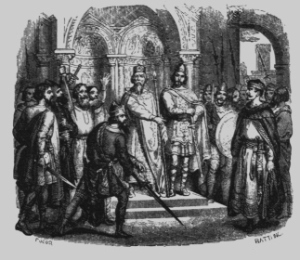 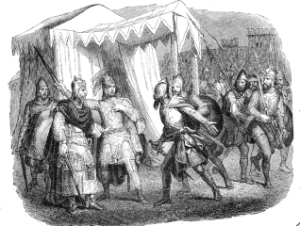 8 thoughts on “Help Wanted: Where Did These Images of the Lombard King Come From?”