And today we think wearing a flag pin is patriotic. Charlemagne used his whole outfit to express his national pride.

In The Life of Charlemagne, Einhard says the monarch “wore the national dress of the Franks” and “disliked foreign clothes no matter how beautiful they were and would never allow himself to be dressed in them.”

Visit Unusual Historicals to find out the message Charlemagne was conveying with his choice of clothes and when he made exception to foreign garb (hint: it has something to do with the ninth-century coin below). 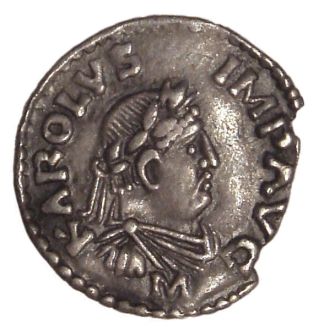 A coin with Charles’s image from late in his reign (by PHGCOM, CC BY-SA 3.0 or GFDL, via Wikimedia Commons)