I have a great image for my upcoming blog post on Unusual Historicals. It illustrates one of Charlemagne’s family feuds in the early 770s, when the fate of Rome hung in the balance.

Just one problem. I don’t know anything about this image such as when and where it was created and by whom. It purports to depict Pope Hadrian asking Charlemagne for help against the Lombards, who are threatening him. I searched online, and all I get is the same copied-and-pasted caption. 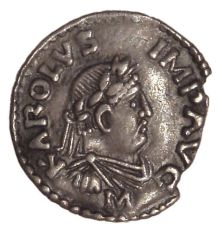 A coin with Charles’s image from late in his reign (by PHGCOM, CC BY-SA 3.0 or GFDL, via Wikimedia Commons)

I can simply write the caption to say what the image depicts, but I would like to know at least when it was made. Judging by the armor, the image was created centuries after Charlemagne’s lifetime, and the king in the painting does not much resemble the guy whose face is on the coin, minted around 812, toward the end of Charlemagne’s life (image from Wikimedia Commons, permission granted under the terms of the GNU Free Documentation License).

If you know what era this painting might have been, have a good estimate, or can point me in the right direction, please let me know. Either leave a comment here or contact me through my website, kimrendfeld.com.

Update: Chris provided me with a link that has the answer. (See the comments.) This is a 1493 miniature from Chronicles of France. Thanks, Chris.

7 thoughts on “Help Wanted: When Was This Image of Charlemagne and the Pope Painted?”