Well, it looks like I will have to make an addition to my author’s note on my second book, The Ashes of Heaven’s Pillar, lengthening this 110,000-word manuscript about a Saxon family rebuilding their lives after losing their home, their husband/father, their freedom, and their faith. (Had to get that pitch in somewhere.)

The book opens with Charlemagne’s first war against the Saxons in 772, during which King Charles’ Franks destroyed the Irminsul, a pillar sacred to the Saxons. In my version of the aftermath, many Saxons accept baptism right away, without any time to reflect, let alone learn anything about their new religion. My main character, a peasant woman named Acha, is angry with her gods for their abandonment and accepts the rite so that the conquerors will not steal her family’s farm and give it to Christians.

A couple of online critiques noted that converts in the early Church were educated before they took the vow, and the critics asked if events could have happened with the haste as I portrayed.

My answer: Maybe. For purposes of the plot, I needed the baptisms to be that fast, but there is circumstantial evidence that baptisms may have been rushed in this period.

In their annals, the Franks complain repeatedly of the Saxons breaking their oaths and reverting to pagan ways, burning churches, and committing other atrocities. The wars between the Franks and the Saxons went on for more than 30 (nonconsecutive) years. A second piece of evidence is letters from Alcuin, a scholar in King Charles’ court, arguing that converts should be educated before they’re baptized, which implies they weren’t. He makes the case against forced baptisms and pleads for learned and pious teachers. 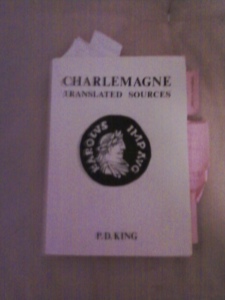 As you can see, I have loved Charlemagne: Translated Sources almost to death.

You can almost hear his frustration in this 796 letter: “If the light yoke and sweet burden of Christ were to be preached to the most obstinate people of the Saxons with as much determination as the payment of tithes has been exacted and the force of the legal decree applied for faults of the most trifling sort imaginable, perhaps they would not be averse to the baptismal vows.” (From Charlemagne: Translated Sources by P.D. King, intended for students and scholars but a great book for novelists and history buffs; any mistakes or misinterpretations are mine and mine alone.)

In the early Church, converts accepted baptism for no other reason than that they believed. It got much more complicated by the eighth century, when a letter from Charles describes priests performing litanies barefoot and abstaining from wine and meat in the hopes that God would grant them victory. Conversion was a political act as much as it was a religious one, an act of submission to a conquering king as well as God. If a vanquished pagan swears an oath to follow a Christian king, by whom does he swear? Not the pagan gods, whom medieval Christians saw as devils, but the victor’s one, true God and His saints.

Even in Charles’ time, the concept of being educated in one’s new faith was not new. Jesus told parables about seeds needing to be planted in good soil and houses needing to build on a solid foundation. What happened between the Franks and the Saxons gives real-life examples of when the foundation–education–is lacking. The events also serve as a cautionary tale for when politics and religion mix.

Two soldiers, one from West Germany, the other from East Germany, in the wall’s early days. Library of Congress photo. Special thanks to Public Domain Images Online.

I remember where I was when I learned the Berlin Wall had fallen. It was fall of 1989, evening. I remember the just faded light, my one-bedroom apartment in Dunkirk, Indiana, where I had recently started a new job. On the TV, jubilant Germans were cheering on top of the graffiti covered wall against the dark sky.

I had thought the day would never come. Literally. I was born in the late 1960s, during the Cold War, and the Berlin Wall had been existed all my life. I expected it to always exist, just like the Soviet Union and its threat of nuclear annihilation.

Those of you age 25 and younger have no memory of two Germanys, let alone the wall that had come to symbolize communist tyranny.

The wall was built on August 13, 1951, to keep the East Germans from fleeing to the West and to freedom. Such phrases like the one I just typed seem like hyperbole. Not in this case. Its status as an icon of the Cold War and an object of loathing is justified.

To learn more, check out the NPR site, whose stories include an interview with a poet who grew up in East Berlin and photos of from the Stasi (secret police) archive. This week, PBS showed an informative program about the wall and its impact.

It’s hard to imagine Italian food without tomatoes. Or German food without potatoes. Or a summer in Indiana without sweet corn, salt, and butter (and by butter, I mean real butter–you know, that stuff that comes from a cow).

What these examples all have in common is a blending of the Old World and the New, the ultimate in fusion cooking.

Cherry tomatoes appear in my garden but not in my stories about the Middle Ages.

Food is a challenge and an opportunity for the historical novelist, especially as she guzzles coffee in front of her computer and realizes her medieval characters had neither of these. Food is a part of culture and a great way to show time and place.

The challenge is not to introduce an anachronism and jar the reader. I was jarred when I saw a character in Return of the King eating cherry tomatoes. Even though J.R.R. Tolkien’s Middle Earth is fantasy, not historical fiction, the feel of the story is medieval, yet tomatoes are a New World food.

The Food Timeline with its many links about items that make it to the dinner plate is a wonderful site about food history. One hazard: The info is so interesting, the author gets distracted from writing and then gets hungry.